I’ve been hearing rumors that Jason, videographer extraordinaire, was either being sought for questioning or was doing something cool (usually the two go together). Time to check in:

Well, since we last spoke I became a rap icon (in Sweden), bought a zoo, cloned myself, but decided there could only be one of me, so I dueled myself, won, then sold the zoo, ditched the rap game (just wasn’t my thing, you know?), and now I’m here.

2. Does your mother know where you are?

I think, but don’t tell her about the zoo.

I spoke with the mystics, threw some chicken bones, and can now tell you that throughout the summer, and also Spring kind-of, the rest of the series will be airing. Episode 5 is launching this week with new episodes launching bi-weekly-ish thereafter until the well runs dry. The end is upon us!

4. Looks like you’ve got another series going. Tell us about it.

Yeah so there’s this brand spankin’ new doc series called Burn Season coming out late summer, which follows Wildland Firefighters lighting prescribed, or “controlled,” fires. Basically these guys go out, start forest fires, then promptly put out said forest fires by day’s end. I went through their training to be able to jump in with them and follow them through their burn season, which was a blast.

5. Blockbusters versus indie films. Your thoughts?

I’m a sci-fi nerd, so blockbusters are my jam, but I always need to balance out Godzilla with some Jarmusch, or Steve McQueen. Keeps you humble. Less manic.

I mean, it used to be simple. You’d do a movie, get coked up, crash your car into a hospital lobby, and suddenly you’re a hit celebrity. Nowadays everyone’s doing that, so us indie filmmakers have to think outside the box. Right now my strategy is, “Just make good shit. If you build it, they will come,” but even that’s super tough. Everyone is doing something these days, so to stand out you literally have to make some of the greatest stuff anyone will ever see. You have to sacrifice money, time, everything to do that great thing. OR you just know the right person. Preferably a person with infinite pockets filled with diamonds and gold and George Lucas.

7. Trevor Ford’s facial expression at “That’s my script!” is outstanding. Did you hit him with a taser or something? 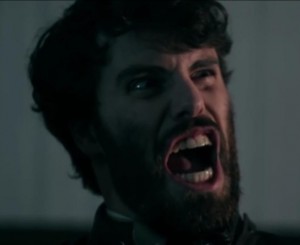 I made him do that probably fifteen times. Maybe more. Watch for the blooper reel of that soon. It’s the best. It might break the internet.

You think you know Nuggi, but you don’t. That’s why I’m so pumped about launching more episodes. People keep saying, “Yeah man, really love the episodes so far, love that space stuff,” but the story has hardly kicked off. Shit gets so real so quick. You’ll start seeing that shift in Episode 5. Everything starts clicking into place.

9. Any film festivals, contests, independent networks in your future?

Great question. Nope, but I’d be down to send it around. Right now I’m tunnel visioned on that final launch of Episode 9 in July. After that, sky’s the limit. I mean I’m sending it to Cannes at least, duh.

10. Can you recite the alphabet backwards?

A: Greater men have tried and failed.