I was tooling around the internet and came across this: http://www.addisonsauction.com/thelastbooksale.html Larry McMurtry is selling 300,000 books? So, I went.

I left Tuesday morning, 7 August, about 0830, and got to Shepherd AFB, TX on Thursday night, the 9th. About 1530 miles, 2 1/2 days, across Tennessee, Arkansas, and Oklahoma. I would have left on Monday, but my pickup truck, Nellie Bell, blew her coil packs the previous Thursday, seventy-five miles away from home, mind you. I had to leave her at the Ford dealer, rent a car, drive home, yell at the mechanic for the next three days, drive back to the dealer on Monday, drop off the rental, pick up Nellie, and then drive home again. So I was already 150 miles into this before I even left Virginia.

Incidentally, this is the only time in recorded history when an extended warranty actually paid off.

So, anyways, checked into VQ, passed out, got up the next morning and drove to Archer City, TX. Which looks a little different than the Shenandoah Valley: 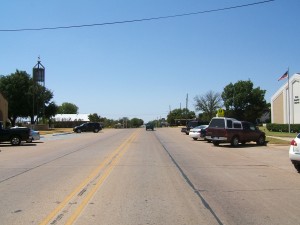 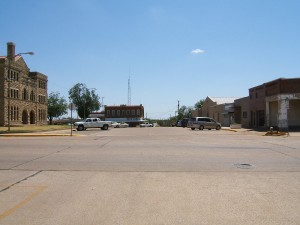 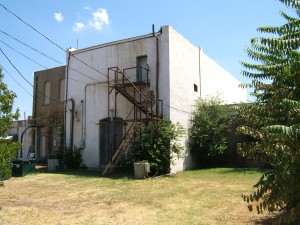 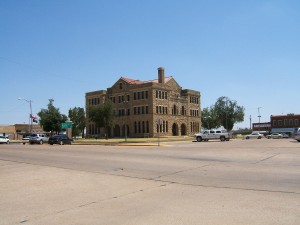 Booked Up,  Larry McMurtry’s store, is smack in the middle of Archer City, about two blocks away from the end of town (which is marked by the DQ): 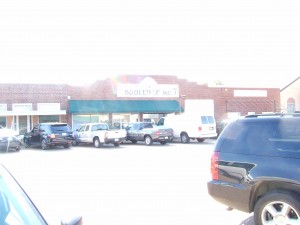 Yes, the sun went supernova while I was taking this picture.

Drove right past, I did, because I was counting on crowds of book freaks to be hanging out in front to guide me in. This is the only crowd I saw: 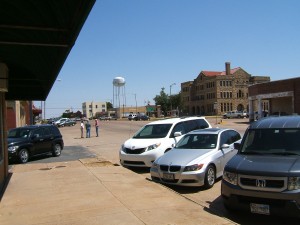 Where was everybody? I parked to get out and ask that very question, and who was the first person I see? 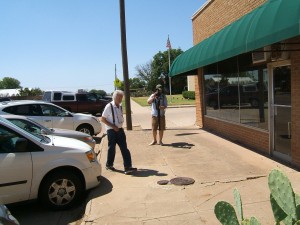 Yep, Larry McMurtry himself, walking around like he lived here or something. Or was just some regular guy, instead of a god-touched giant among authors. So, I mentioned to him that it seemed a bit odd that an Immortal would take on human form and walk among us: 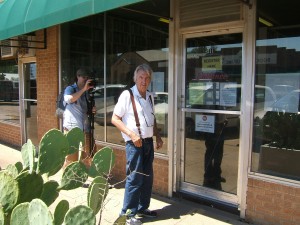 He pretty much stayed away from me, after that.

Booked Up consists of four stores: the main one, brightly pictured above, and three other warehouses scattered hither and yon. I registered in Warehouse 2 with the auction staff: 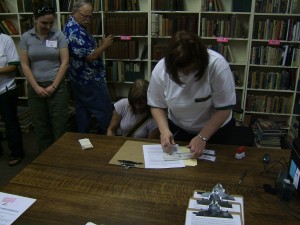 So, I started checking out the book lots for sale: 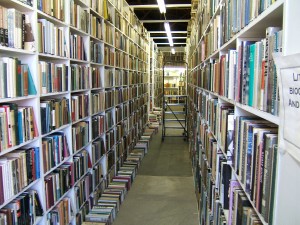 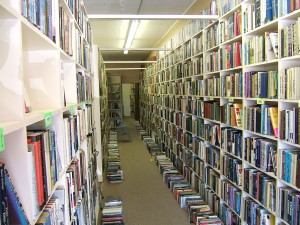 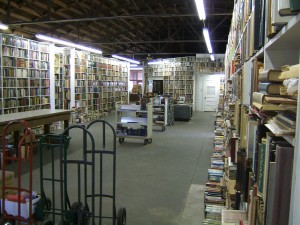 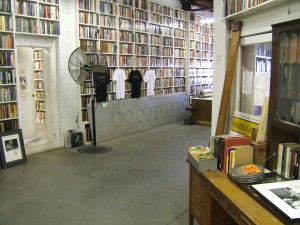 Holy inkwells, Batman, there sure am a loooooota books to go through! But I managed it, hitting all four warehouses in about five hours, marking out eight lots for bids. Each one had 175-200 books in them. Each. Questions of logistics presented themselves, such as, how in the blue blazing hell am I going to load 1600 books into Nellie Bell and drive them back to Virginia?

Eh. Worry about that later.

There were some interesting side items, like the Goodspeed sign up above, which once hung over a storied Boston bookshop, a place so storied that I’d never heard of it. ‘Course, I’d never heard of Archer City, TX, either. That’s right. In all my decades of patronizing bookstores, and for  all my admiration of God McMurtry, I didn’t know, until the auction notice, that Mr. McMurtry was a book scout, let alone owned a fabled bookstore.

I am, mostly, out of touch.

There was other stuff in the warehouses, like this board hanging up in the back storage lot of Booked Up #1: 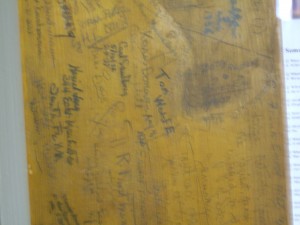 See any signatures you recognize?

Some Larry McMurtry arcana in the front, none of which I could afford: 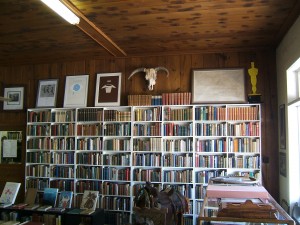 This was taped up inside the window of Warehouse #3: 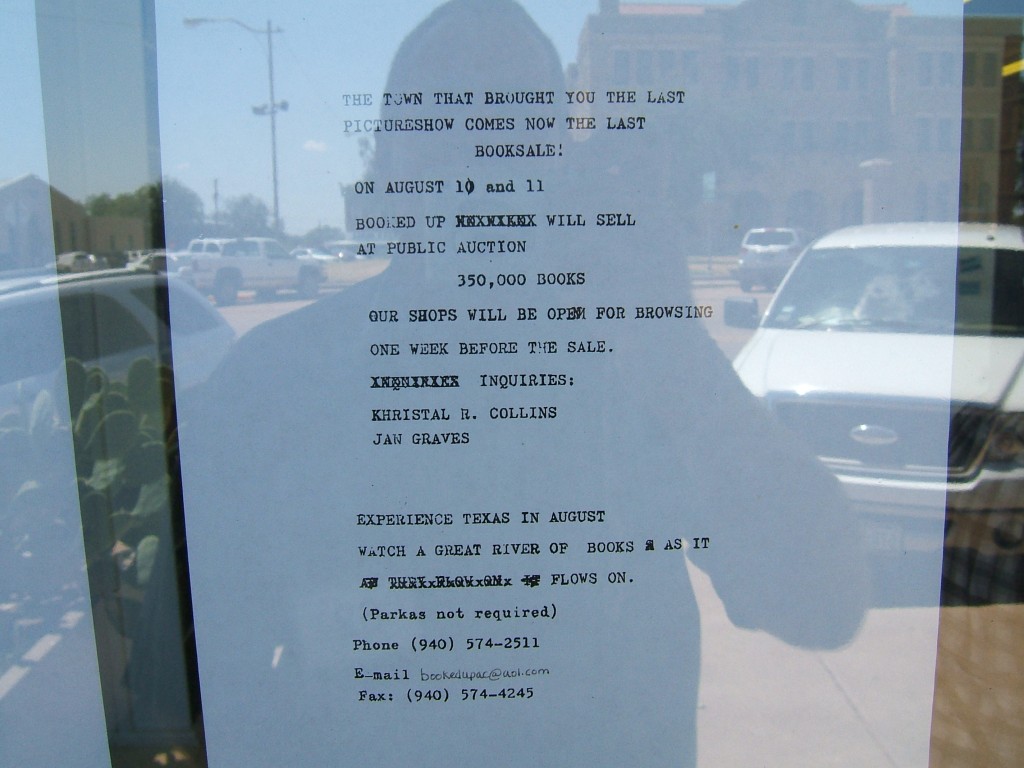 Larry McMurtry uses a typewriter. But not White-out.

I took several breaks, mostly inside the Wildcat Cafe: 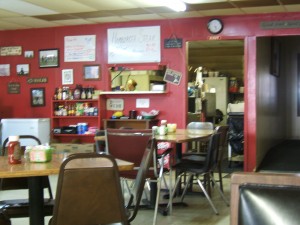 which has the best waitress in America, Mary Ann. She said the Cafe was staying open until 7 each night for the duration of the sale. They usually close at 2. In the afternoon.

Around 5, I wandered over to the Royal Theater for barbecue and a showing of The Last Picture Show: 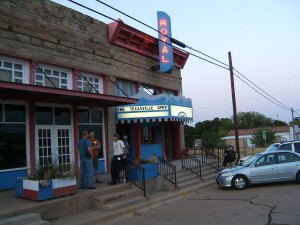 The barbecue was great, and all the free beer you could drink, which was greater. There’s Larry McMurtry standing up in the back, celebrating the free beer: 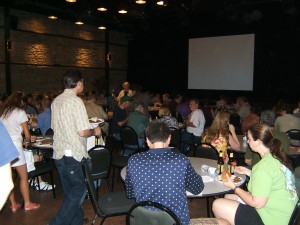 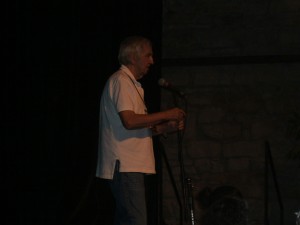 , telling us stories, like how Peter Bogdanovich ordinarily wouldn’t have bothered with such a low-key hick town film, but he was between pictures and didn’t have anything else to do. Which proves your best work usually happens when you’re not paying attention. The film was shot in Archer City and it was a hoot recognizing places on screen you’d just been (like there were a lot of places to chose from; I think they shot the whole thing in about a one-block area). I saw it when it first came out back in, oh, what? 1902? and thought it a pretty bleak and depressing film. Time has not changed my opinion, which makes me wonder how many people in town were a bit PO’d at Mr. McMurtry when it came out.

Went back to VQ, passed out, came back the next day for the auction itself: 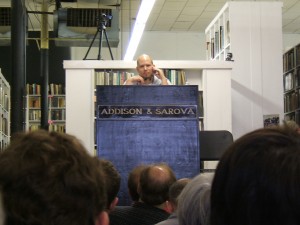 That’s Mike, the auctioneer, and you have to feel sorry for a guy who has to sell over 1500 lots in two days. He did a pretty good job, with a couple of glitches here and there brought on by the speed of the lot sales, some going in about twenty seconds. A few went for some pretty steep prices, $1500 and up, but the majority went between $100- 250. I got outbid on my first lot and on the Thomas Wolfe that Larry McMurtry had put on a separate list, called the McMurtry 100, so I took a break and went next door 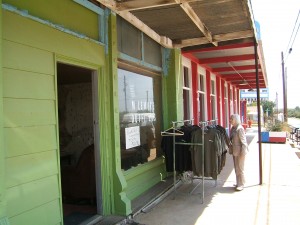 and started talking to this guy: 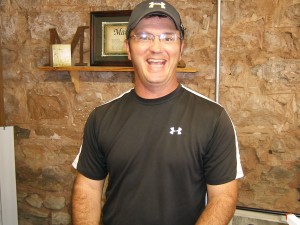 He’s Matt McLemore, Larry McMurtry’s nephew, purveyor of fine hunting and fishing equipment and Lonesome Dove-themed t-shirts (bought three). We got into a conversation regarding sports and he said, “Say, are you interested in some books? I’ve got some in the back.”

I spent about an hour going over his shelves and bought six: 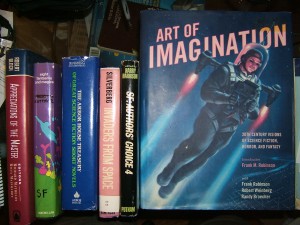 SF anthologies, my weakness, and cover art. A Jack Vance. A Harry Harrison, who recently died.

I wandered back to the auction just in time to buy my very first lot, for $100. Proud, I was, and I figured it’d be about three hours before the next lot I wanted came up so I took a break and headed over to the Wildcat, running into Mr. McMurtry again: 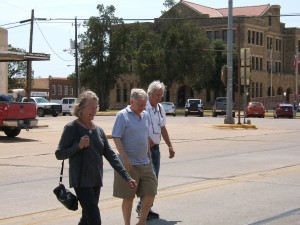 He was happy to see me: 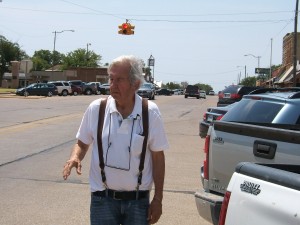 I then went to Dollar General at the other end of town and bought three big plastic bins for the lot I purchased. If I ended up buying the other lots, I’d probably need nine more bins, so better wait and see because twelve big plastic bins stuffed with books and stacked up in Nellie Bell’s bed…they’ll ride all the way back to Virginia without mishap. Yeah, they will.

Went back to the auction pretty sure I was about a half hour early, and discovered they were on the last three lots. Mike the auctioneer had gone into warp speed, blasting through the remaining lots in about 2/3 of the time I calculated, passing on several lots, leaving them unsold. Kudos to him, but I was miffed, especially since three of the passed-by lots were ones I wanted. Coulda had ’em for $50 each.

But, it’s probably a good thing I didn’t get them because, when I packed my one lot, the three bins took up 3/4 of Nellie Bell’s space. No way I’da got nine more bins in there.

While I stood in line for, oh, six and a half days, to pay for my lot, I got to talking to other attendees. There was a buyer for Powell’s Books, a museum director, and an archeologist at Big Bend National Park, who had done his thesis on a 17th Century massacre of Spanish missionaries by the Comanches and the Ouachitas at Menard, Texas. He dug up the site and then tested the bullets he found, figuring out which were Spanish and which were French, and reconstructed the attack from that.

I went back to Shepherd AFB, checked out the next morning, spent a couple of days in my old neighborhood in Lawton, Oklahoma: 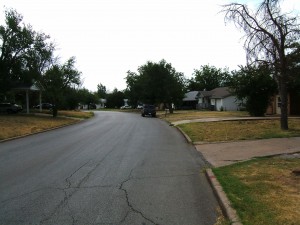 (more on that later),

and got back to Virginny on the 16th, driving through some hellacious downpours.

Overall, a good time had by all.