The Darkest Hour. Also the Brightest 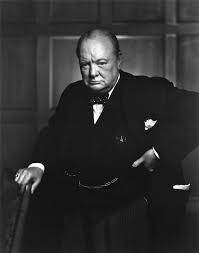 A hero arises at a critical moment and changes history…I think that’s a fairly decent summary of the Great Man Theory (spare me, feminists. That’s what it’s called). Either God raises a Great Man or society produces a person with the necessary characteristics, whichever, to save the day. I don’t see how one of those excludes the other so I shall add a corollary: at the right moment in history, someone nuts enough to take on everything shows up.

That’s the movie Darkest Hour: at what has got to be the worst possible moment in history, Churchill becomes Prime Minister of England. The government is dithering, Hitler is burning Europe, and no one in their right mind wants the job. It is the darkest moment; it becomes the brightest as we all with the benefit of hindsight now know and accept because Churchill saved civilization. Well, okay, the Americans helped but, if he hadn’t been nuts enough to take the job, there’d have been no England for us to help. We take this on faith. But if the movie is halfway accurate (and, apparently it is), it wasn’t all that cut and dried. Indeed, it was a Very Near Thing.

For a movie with little action, it’s incredibly tense. The five or six seconds here and there of bombs falling and things blowing up are actually a relief because, hoo boy, all the polite mannerly English drawing room talk which takes up about 95% of the movie has the atmosphere of a knife fight. That’s because Churchill was no one’s choice. For reasons not made clear, he is the only person acceptable to the political opposition when Chamberlain’s incompetence finally causes the just-as-incompetent Parliament to give Nev the boot. The king doesn’t want Churchill. His own party doesn’t want Churchill. Turns out he gets picked because the ever-so-smart sophisticates need someone to blame when Hitler invades England. Yes, when Hitler invades. 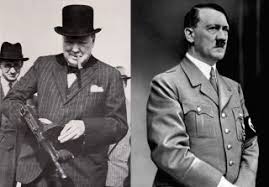 The sophisticates have already given up. It’s a complicated, nuanced world you see, and we betters intend to negotiate a peace with Hitler after he destroys our army of commoners (poor blighters) on the beaches of Dunkirk because then the Fuhrer will be reasonable.

So, essentially, Churchill is set up to fail. His own cabinet, including Chamberlain and Lord Halifax, are conspiring behind his back to bring him down and force peace negotiations. And he’s the perfect fall guy. The son of scandalous parents, he’s broke and drunk all the time, incredibly difficult to work with, only his wife able to talk any sense into him (and she’s a piece of work herself), 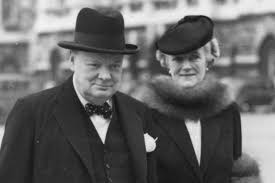 hated by his kids, laughed at by everyone from butlers to kings, and a colossal failure in his last wartime post (guy’s responsible for Gallipoli). 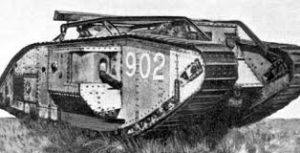 If everything goes TU, then it’s obviously this guy’s fault. Except…

Churchill shares the one trait uniting all the other Great Men (and women. I’m looking at you, Margaret Thatcher) 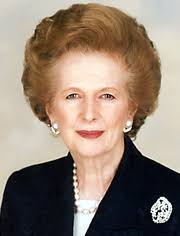 of history: he believes in doing the right thing. Oh, he shares some other unfortunate traits of Great Men and Women (still looking at Margaret): a jackass easy to dislike; not someone you want over to the house for Sunday dinner; loud and obnoxious and annoying and your opinion of him is shared universally with all the other Best People who are just simply appalled, but he’s going to do the right thing. He does not believe in a negotiated peace with Hitler. Oh no. We’re going to fight. On the beaches, in the streets, wherever, but we fight. We are going to get our boys off the beach at Dunkirk and we are going to defy the tyrant and remain England because that is the right thing to do.

He stands alone, is ridiculed, opposed by everyone. Even his faithful war minister turns his back. And he begins to waver, until that marvelous scene when Churchill rides the underground and asks the commoners, the serfs, if he should negotiate. Resoundingly, to a man, to a woman, to even a child, they say no. We fight.

Now, I could talk about production values and acting and writing and direction and lighting (and I gotta say, this is one of the most brilliantly lighted movies I’ve seen in years) like you’re supposed to do when reviewing a movie and yes, yes, all of that was great, but it’s not the point. It’s that the right thing is a function of the powerless, whose whole life consists of doing the right thing and who are not cynical nor jaded enough to accept fashionable opinions because, as Orwell said, there are ideas so stupid that only an intellectual could believe them. The powerless, the Great Unwashed, are laughed at and patronized and crushed by the sophisticates until events become critical and we’re all going to die and then the Great Man shows up and does the right thing, their right thing, which is counterintuitive, is always unpopular, and takes a man of great strength to stay on its course. I don’t think I could have, especially when such brilliant intellectual thinkers like oh, well, everybody else says how wrong you are. But Churchill did. And we’re not all speaking German today unless we want to.

Imagine. A leader arises who, despite the concerted and almost unanimous opposition of the elite and intellectual classes, does what the people want him to do.