The next event after Greg Bear was David Brin talking about the future. Wow, a double header and I was all a twitter but, I messed up the time because I was hobnobbing with Greg Bear (we hobnob) and thought the Brin show was actually an hour later than it was and holy moly! I’m late! and I burst into the middle of Brin’s…Skype call.  Drat. I thought this was gonna be an in-person performance and that may have been the original intent but circumstances prevailed. I guess. I came in late so I was not entitled to an explanation. So I surreptitiously put away my copy of Murasaki 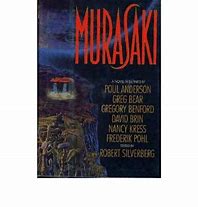 which Greg Bear had just signed and settled in for the remainder of the show. 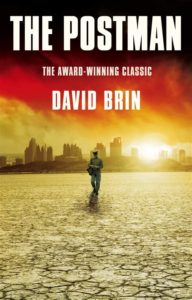 had its synapses removed. I haven’t actually read the novel so I cannot make a comparison between book and screen version but the movie…yeech. I wonder how many authors hate their screen versions? That’d make an interesting survey.

Brin thinks going back to the moon is stupid. There’s nothing there. Now, putting a space station around the moon…yeah, do it. The tourism alone would pay the fare, and it would be a good place from which to launch intra-solar missions, like collecting asteroids or looking for the proto-molecule. It would also be an excellent place to keep security assets because they’d be immune to anti-sat weapons. Brin is my kind of militarist. And futurist. He believes there is a never ending human impulse to fall back on feudalism. No kidding. Instead of ever onward and upward to the Bright Shiny Future, we are one temper tantrum away from the Dark Ages. Be on your guard.

I then drifted into another panel I had been looking forward to, Faith and Reason in Science Fiction. I sort of have a stake in the topic

and was interested in the latest takes from the oh-so-smart panelists: 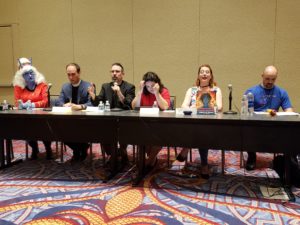 One of the pastors on the panel said she did not believe in the literal Bible and that it was “too serious to take seriously.” This is why I no longer go to church. This is why a lot of us no longer go. The only churches left that still hold to a modicum of Bible-based faith are obsessed with evangelizing their already evangelized congregants or are taking the Bible too literally, like that whole 6000 years-old Earth thing. Or bringing in rock bands for two hour singalongs. No thanks. Soon to be spewed.

I don’t get the whole faith-versus-science trope to begin with. How does one obviate the other? How many of you have taken samples from a neutron star? Yet, you take their existence as a given because it’s based on “science;” no it’s not, it’s based on faith, faith in human thought and logic and the scientific method. God? Tut, how quaint, a sop for the ignorant masses who aren’t as brilliant as we. Word you’re looking for here is “arrogance,” which is the main issue between God and Lucifer, who wants to be like the Most High. It’s the reason we’re all here, to resolve the dispute. You say no, we’re here because there was so much nothing that there was something…which is just as silly as claiming we are riding on the back of the cosmic turtle. But you’ll cling to the “so much nothing” theory because the idea of a Creator interferes with the party. And we do love a good party.

It is not “either-or.” Indeed, each new scientific discovery speaks more and more to a Designer because, Holy Hannah, are we wondrously made. And science tends to refute itself, like that whole steady state universe thing, each refutation underscoring the wondrousness of how we are made and proving that science can’t be the basis for your faith. Find something else. Like that cosmic turtle.

Some of this was offered by the panelists, ironically enough by born-again atheist Robert Aldrich, who said science is not a faith system but an investigative system, which is dead-on right. He pointed out that scifi isn’t very sci because there’s laser swords, which are impossible. Lots of things that defy natural science show up in scifi because it can; it’s fiction and imagination and  a grand playground where every kid gets his own swing set. Guy seems squared away on this whole faith and science non-controversy. At one point, he rolled his eyes when one of the so-called believers on the panel contended that morality was Bible or God based, and I took it from aforementioned eye roll that he believes morality is an evolved trait that allows us all to live together in a civilized society, or something along those lines and I wanted to ask if that was, indeed, his position because I was going to challenge him to drive a school bus for one week and see if that revises his opinion but the Q&A, like all Q&As these days (see previous post) turned into a writing seminar for one guy who was interested in character development.

Other points raised seemed to be apologetics of one kind or another. The Battlestar Galactica reboot was scifi concerned with the questions of existence, yeah, yeah, and the older scifi tradition had room for religion and Star Trek had a chapel on the Enterprise, yeah yeah which doesn’t make any point towards the topic at hand. It seemed like the so-called believers on the panel were intent on looking progressive and open-minded while the non-believers got to be radically dismissive of any religious belief, even ones involving the backs of turtles. A world that does not believe in God will believe in anything, (yes, I know, a paraphrase of an apocryphal G. K. Chesterton quote).

I gotta ask: why are scifi people so reflexively pro-Marxist, anti-conservative, anti-Trump, anti-America? Is it just vogue? Prerequisite for invitations to the best parties? Because it makes me think that scifi people think in bumper stickers. Just a spare survey of history shows what a disaster planned economies are, yet on any given opportunity they gush about them. Don’t actually have to live in Cuba or Venezuela, so can be exuberant. And, boy, don’t mention Trump. Scifiers get downright poetic in their vitriol, I guess because his election has set the Federation back a few decades. You know, the Federation? where everyone will have their own hospital and neurosurgeon for free and we’ll all eat organic protein that’s non-organic and love each other regardless of species and have jetpacks?

This is the 50th Anniversary of 2001: Space Odyssey, the movie, and all stops were pulled out in celebration, as it should be because that movie turned scifi topsy and turvy. Before it, we had Plan 9 From Outer Space and It Came from Outer Space and other cheese and occasional good ‘uns like The War of the Worlds and Invasion of the Body Snatchers but this one, whoa. Never have so many loved a movie in which they walked out going, “Huh?”

EV2018 put on a seminar hosted by people who wrote books about the movie or who knew people who worked on the movie or were the children of people who worked on the movie. Like Fred Ordway, Jr, whose father worked at NASA, was a pal of Werner von Braun and Arthur C. Clarke. Ordway mentioned to Clarke some of the projects he was working on and next thing he knows, Kubrick is calling: say, Fred, Art tells me you’ve got all this neat stuff at NASA, can you box it all up and bring it to London for some movie I’m working on? Guess security was a little looser in those days. John Lang, the son of art director Harry Lang, said a lot of the original drawings for the movie were tossed, but his Dad fished them out of the garbage for later posterity. Oh, Greg Nicotero was on the panel, too. He said he was the model for the apes.

Harry Lang didn’t go to the movies much so he didn’t know who Stanley Kubrick was which, according to everyone, was a good thing. Apparently, Kubrick was rather difficult. Oh, just say it, he was a downright pain-in-the-ass, wanting to know such things as the payload capabilities of the Discovery, which had nothing to do with the movie other than background accuracy. At some point, Kubrick decided to change from Jupiter to Saturn but, when the costs came in, decided to keep Jupiter. Kubrick and Ordway ended up hating each other. Wonder why.

Ordway was an Army Intell officer gathering information on rockets. He was having meetings with Russian colonels in Greenwich Village cafes, and making the rounds of science conferences, where he met Clarke. Clarke was working on a short story, the Sentinel of Eternity and a timeprobe anthology when Kubrick contacted him, elements of both ending up in the 2001 script. This was in 1964 and Kubrick wanted the movie to be as accurate as possible and only NASA knew what the moon and rockets actually looked like hence the call to Ordway and the boxing up of Uber Top Secret plans and photos for later cinematic display. Sheesh. Today, if you Email your yoga schedule, you go to jail.

Ordway went to every aeronautical company in existence and got thirty scientists to show up on set and put in their two cents. Like the design of HAL, 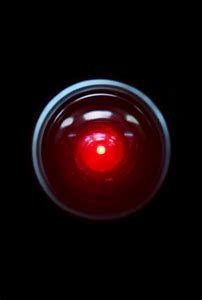 which was first conceived as a walk-in computer. That design ended up as Mother in Alien. 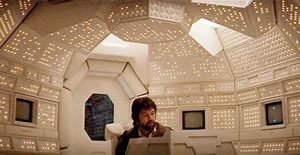 Everyone thought computer memory would be molecular by the far distant year of 2001, so that’s why you’ve got those liquid filled baby monoliths that Dave is fooling with…what are you doing, Dave? The HAL 9000 was actually supposed to be the IBM 9000, but Roger Caras sent them a letter going, “Oh, by the way, your IBM 9000 is going to kill people.” “Really?” IBM responded. “Take our name off, then.” That’s how we ended up with Heuristic ALgorithm 9000. This was one of the first product placement movies, with logos and stuff everywhere. The companies wanted everyone to know they were still going to be in business fifty years from now. You know, Pan Am, Howard Johnson’s, Bell Telephone?

Then we got to watch the movie. In company of these people.

How cool is that?