Interview of Cat Connor, Author, and President of New Zealand 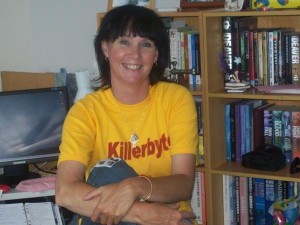 Well, she SHOULD be the president of New Zealand. But she is definitely one cool writer who’s got an amazing crime series out that you really, really should be reading:

WITSEC isn’t a topic that should be discussed. Chances are I’ll disappear. Do you want that? Cat is a very good easy-to-remember name. It’s short for something but I can’t tell you what. See my earlier comment about WITSEC.

The _byte series is a collection of stories about FBI agent Ellie Conway and her team. The series is set predominately in Northern Virginia and Washington DC. They’re fast paced, action orientated, character driven, thrillers. I have so much fun writing this series. Huge fun. I never know where the story will go next and that is really exciting for me.

I do have plans to set at least one of the books here in NZ but that depends on my main character and how willing she is to take a teaching position at Victoria University. Ellie isn’t known for being terribly accommodating to my ideas. She pretty much does what she wants and I follow along and document it.

The series so far, in order and with loglines:

An FBI agent is taunted by a killer who murders her friends and colleagues. Can she stop him before he kills everyone she ever cared for?

A newly married FBI agent, SA Ellie Conway, investigates a series of horrific homicides that she believes are concealing other heinous crimes.

SSA Ellie Conway is the recipient of some unusual mail; meanwhile a terrorist from her past surfaces as she’s trying to find a killer in a hospital, and life gets messy.

FBI agent, SSA Ellie Conway, investigates the murder of a jeweler and uncovers more than she ever expected, shaking the foundations of at least one federal agency.

SSA Conway emerges from a tequila-filled haze to rejoin Delta A. While investigating a strangling case, she uncovers a terrifying situation involving fissile material within DC.

An FBI agent framed for murder must protect an actor and clear her name while on the run.

As surveillance footage disappears in front of her, FBI agent Ellie Conway tries to piece together the events and people involved to prevent more terror attacks and deaths in Washington, DC.

3.      What other books/collections/whatnot do you have out?

4.      Other than as a “Lord of the Rings” backdrop, Americans don’t know crap about New Zealand. Explain it to us.

New Zealand is an island nation. It is NOT part of Australia. We are part of the Commonwealth. We have three official languages – NZ English, Maori and NZ sign language. We’re friendly but you don’t want to piss us off (people can disappear down here, never to be seen again). NZ is a melting pot of cultures and ethnicity. Generally speaking we’re open, fun, sporty, creative, and intensely proud of our country. Also we’re fucking good at rugby and we don’t cheat in match races (Dean Barker and the crew of Team NZ are the best yachtsmen in the world).

5.      What’s the difference between Zealanders and Aussies?

Kiwis are much classier than Aussies. It’s a fact.

Also, Aussies talk funny. Not a fan of any of the variations in the Aussie accent. It’s not at all a sexy accent.

What’s the difference between Canadians and Americans? [DustySkull note: Canadians are American-lite]

As a writer my view on the literary scene here tends to be clouded by my experience and by the NZ literature I was forced to read at school. It was slow, stifled, and full of literary wanking. Stories about nothing, in which nothing happened.

There are more genre books out there by kiwi authors now. Actual stories with plenty happening! It is still hard to get published in this country unless you write Sci Fi, cookbooks or books about blokes and their sheds. There is still a required minimum NZ content for most fiction – it’s not enough to be a kiwi author you have to write about NZ. I find that ridiculous because kiwi readers read international stories and authors, we always have. I think that harks back to the boring stories we were forced to digest as kids.

But for readers, things are changing. With eReaders and online shopping we can now enjoy a much wider selection of books and aren’t confined to the books the brick and mortar stores will stock or the books NZ publishers will publish. Paperbacks here retail between NZ$25-45 … that alone makes shopping somewhere like Book Depository very attractive!

This question always amuses me. It implies I give thought to writing and what I’m writing. I don’t. I just write. A question pops into my head, I sit down and write with no idea where it’s going or how it’ll get there. A little bit of blind faith is employed. I write until the story is finished. While I’m working on a story there is always a notebook near me. If I can’t get to my laptop for whatever reason I will write scenes in the notebook. Writing for me is a linear process. Beginning to end. No jumping about. The jumping about and fleshing out of scenes comes after the first draft is finished. At that point I go back and I catch (if I’m lucky) the lazy assed writing and those scenes I skimmed because I just wanted to see what happened next. At that stage I quite often use a huge whiteboard to draw the timeline for various crimes or whatever. My notebook ends up filled with scrawled names and places and notes pertaining to the story line, bits of research, and sometimes photographs of places in the story. Once I’m mostly happy with the story I send it to Action Man’s kindle and my kindle. We read it. We compare notes. I pull scenes out and send them to various experts – this is especially true for medical scenes. Once everyone agrees and the story is as good as I can get it, I send it to Jayne at Rebel. Then the real work begins.

8. What’s the best New Zealand beer, and how do you know?

The best NZ beer … that’s a hard question. We have a lot of excellent beers from the big breweries and then there are the craft beers. I don’t know where to start. As far as NZ beers go, I kinda like Steinlarger but really like Mac’s Gold. How do I know? Experimentation or a misspent youth, depends on your point of view.

Probably wrong to say my actual favorite beer isn’t even a NZ one?

(Corona – with lime or lemon and tequila. So good. So very good.)

9. Tell us about your next project.

My next project is Databyte. Well, it’s not really. It’s the next _byte series book. It’s due out Aprilish 2014. Currently I’m working through Databyte edits with my editor at Rebel. After Databyte comes Eraserbyte, I just finished writing that. I’ll show it to Rebel in a few months. What I am working on is Psychobyte. After deciding this year would be a one book year … having already written a novella and a novel and several short stories, it turns out there was another story that really wanted to be told and I don’t appear to have much of a say in it. I’m also writing 3 short stories for October. I’ll let you know what we’re going to do with them.

I don’t have an accent you do. J and I rather like yours.

But if you insist I have one and really want it. Come spend a few years in New Zealand and we’ll try and teach you. It might take a while. The accent you like so much isn’t typical kiwi. It’s what happens when Canterbury, Southland, and Wellington meet in Virginia. Am imagining the expression on your face as you try and figure that out. Does it have something to do with question number 1? You know the answer to that. I’d tell you but  …

3 Responses to Interview of Cat Connor, Author, and President of New Zealand