The Fonz is Revving the Bike 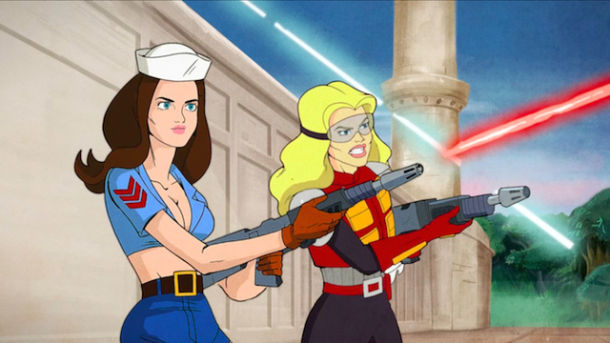 I DVR Community; heck, I DVR everything because it’s so much better to zip through commercials than suffer an aneurysm. So, I was prepped for Community‘s GI Joe episode by the blurb and didn’t immediately go “WTF?” when the cartoon started.

Because, well, this has already been done. The infamous stop-action Christmas episode comes immediately to mind, and, apparently, not just to me because the cast makes a joke about it towards the end of this episode. Got to give Dan Harmon credit for acknowledging plowed ground.

And there were good moments. I, too, have long wondered about the marksmanship of GI Joe and Cobra, so it was great to see the Joes’ and Cobras’ reaction to someone actually getting hit. And the increasingly paranoid TV commercials were a hoot, as was the ending PSA. But, this is inside baseball.

We viewers do like formula. The Brady Bunch lasted for so long because we knew that, every week, there would be some kind of First World crisis involving Greg and Marsha, and at least one Alice witticism. Community‘s brand of nuttiness is also formula, and I look forward to the weekly whipcrack banter around the table and the subsequently ridiculous situation requiring an even more ridiculous resolution. Pillow Fort, anyone? But, certain things are one-offs: the Christmas episode, f’rinstance, which was the superimposition of a cherished childhood icon onto Abed’s rather tragic condition. It worked. But it won’t work twice. The imposition of cherished childhood icon GI Joe on Jeff’s turning forty? Puhleeze.

I sense the presence of a jumping shark. Already, Community has resurrected a Dungeons and Dragons replay that, admittedly, worked because the group was relying on a previously used technique to help out a pal. But, like any shadow, it was a weaker version of the original. And, yes, a high-concept show like Community is going to have difficulty keeping up the high quality from episode to episode. Just look at Season 4. But, when you’re grazing among the gems of past glory, then perhaps it’s time to go all Wonder Years and end on a high note.