The Adventures of Gracie the Wander Cat 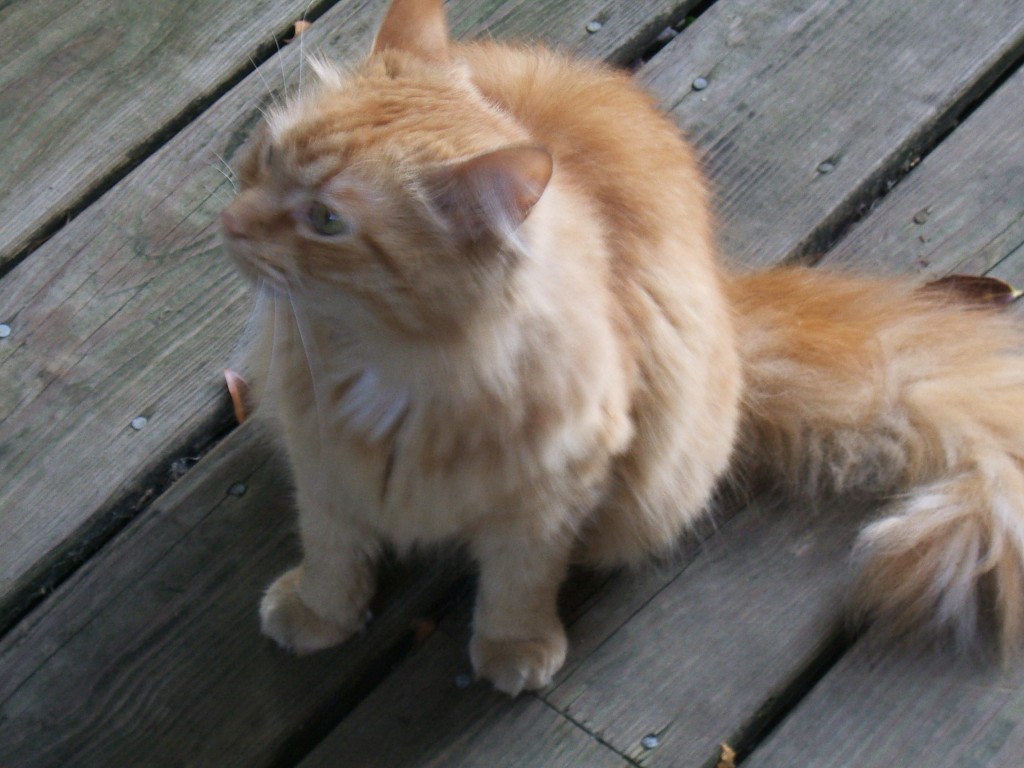 I guess I’ve always lived in this house. I don’t remember any other place, so, must be. The idiots living here kept me in the closet or the basement, depending on the day. From what I could glean, the guy who owned this place was some kind of ogre who wouldn’t let the idiots have a pet so they hid me… 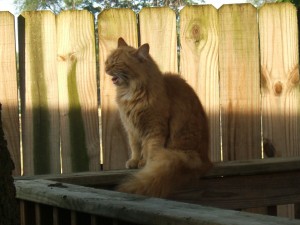 I didn’t like the closet. The main idiot put my litter box in there, lined the room with aluminum to seal in the odor, and left me inside, all day. No food, just water. He’d let me out when he got back from school, give me a gaggy snack, then throw me out in the yard. The other idiots would put me in the basement when the first idiot forgot about me or was off doing something else, which was, actually, better. There were mice down there and things to get into, and the back of the oil furnace made a handy toilet. Besides, they cut a little opening in the basement door so I could come and go as I pleased. 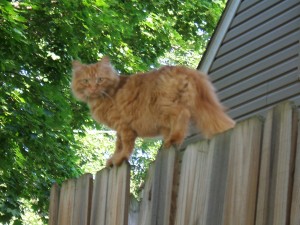 Had a pretty good time, except for the one or two occasions when the main idiot took me to a vet who gave me shots and snipped the ol’ tubes. I didn’t much care for that.

So, one day, I’m running around the house because all kinds of interesting things were going on. The idiots were hooting and hollering about “Graduation!” or some such nonsense, packing up a lot of boxes and moving a lot of crap around. Entertaining. Closet Boy put me out in the yard and drove off. I played around on the street for awhile then came back and waited. And waited. And waited.

None of the idiots came back.

So, right then and there, I’m a Wander Cat. Not a Wild’un, like the group living over there in the woods: Wild’uns never knew a home; Wander Cats did. Wild’uns don’t like Wanders, and vice-versa. They think we’re pussies, yuk yuk. We think they’re stupid.

Because, you play your cards right, you can get people to take care of you.

Which is what I did. This guy, D. Krauss, moved into the place a few weeks later and I kept showing up and meowing and rubbing against the guy and he’d say, “Hey, Cat, who do you belong to?” Well, you, dummy, but he never caught on and winter came and I spent it going from place to place, taking a meal from some kind old lady and a houseful of female college students down the street, or making one out of the occasional field mouse. Lived under porches and under D. Krauss’ deck out back, something he never knew. 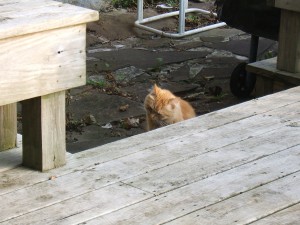 From time to time, I’d find him outside and and rub against his leg, trying to catch his interest, but they guy is just too dim. 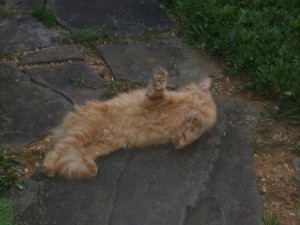 So, one spring day, I hear my name being called, “Gracie! Gracie!” I come out from some wood pile and saunter on over and it’s that guy, D. Krauss, standing on his porch holding some kind of card. “That’s your name, huh?” he asks, looking at the card. Well, yeah, I came, didn’t I?

“According to this,” D. Krauss waved the card at me, “you’re an orange-and-white longhaired Main Coon, a runt, and you’re due some shots,” and the guy grabs me by the back of the neck, shoves me in a box, and, next thing you know, I’m gettin’ flea dusted and vaccinated and groomed and, well, I’m not liking it very much. I spit and scratch but the vet wraps me up in a towel and gives me a shot and, wow, the colors, the colors…

When I wake up, I’m back in the house. Oh no, not the closet! So I stumble over to the door and raise a racket and that D. Krauss guy comes over, “What’s wrong, what’s wrong?” and I’m still at the door raising a ruckus and he opens it and I bolt.

Been outside ever since, but, it’s okay. That D. Krauss guy has been feeding me. Feels guilty, I guess, and I’m not stupid so I show up and meow and act grateful and even let him  scratch my chin, but you ain’t gettin’ me back inside, bub.

After all, I’m a Wander Cat. 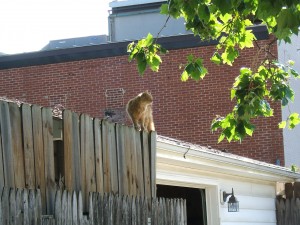