There is No Sanctuary

Yeah, there is. Libraries.

Went to mine a couple of weeks ago and picked up these: 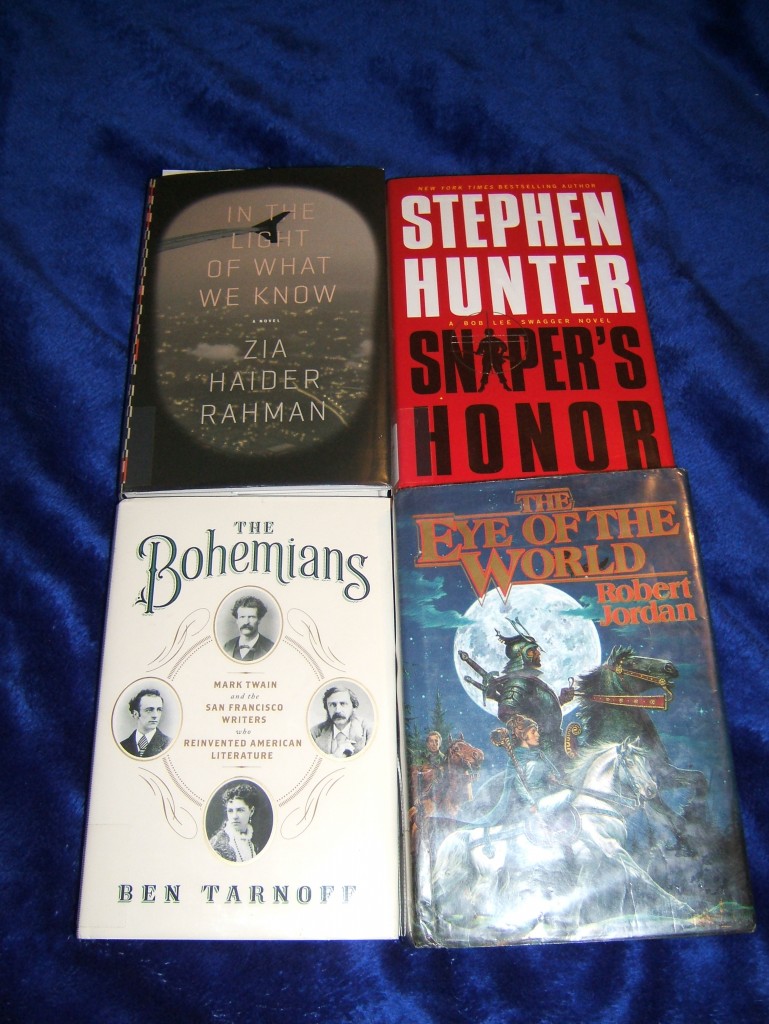 Already finished In the Light of What We Know, and I’m in the middle of The Eye of the World. So far, eh. It’s so obviously Tolkien that I just want to go, “Been there, done that,”  and pitch it across the room, but, every few pages or so, an interesting situation shows up so I’m going to stay with it. The Stephen Hunter is a new Bob Lee Swagger  novel, and I loves me some Bob Lee, so it’s next. And I have to read at least one non-fiction per library visit, so who can resist something called The Bohemians? Besides, it’s Mark Twain.

God, do I love libraries.

I had a rather crappy childhood, and libraries became my hideout; specifically, the ones located on Ft. Rucker, Alabama (when I was 10-14 years old), and then the one in Pemberton, NJ (from 14 to 18). After that, wherever I could find one.

I got to the Ft. Rucker library about once every two weeks, during Mom’s biweekly commissary trip. She’d drop me off, because that was one less whining kid to deal with, and pick me up on the way back to our in-the-middle-of-nowhere house some 25-30 miles south of Enterprise, AL. Those were the days when I was reading 600-700 wpm, so I loaded up: Heinlein, Bradbury, Asimov, L’Engle, Moon, anywhere from 10-20 books at a shot. I’d blast through them, and get another 10-20 on the next trip. We also had a bookmobile show up once a month at Goodman Elementary School, and I cleaned them out, too.

My first honest-to-God job was at the Pemberton Library. I got paid $2.00 an hour to shelve books, clean up, and check out patrons (their library books, not the chicks, although I did that, too). Imagine, working in a place you love. I got into a lot of trouble because I’d be back in the stacks and spot something interesting and, two hours later, the boss finds me curled up in a corner reading. Ah, indolence.

Since then, the reading speed has dropped precipitously (might have something to do with a rather misspent adolescence), and the opportunities to read, also (Assassin’s Creed is killing me, pun intended). But, I still go and browse through the shelves. Despite Goodreads and Kindle Boards and all the other thousands of reading sites out there, the New Books section, just past the circulation desk, is where I find my next read.

This entry was posted in Libraries. Bookmark the permalink.