Oh no! There Goes Tokyo Again… 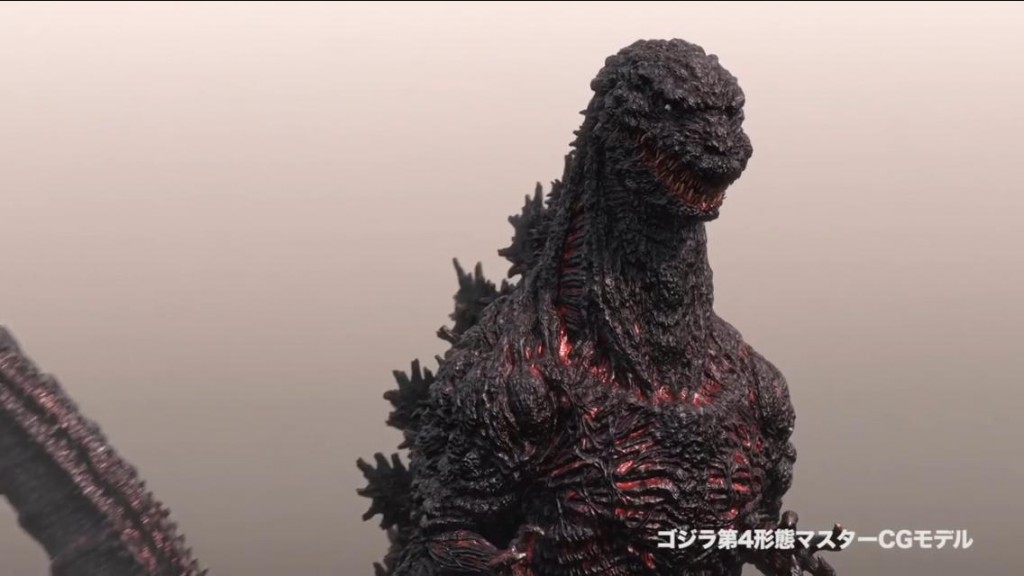 Godzilla! Or, more accurately, Shin Gojira, the latest iteration of the much beloved rampaging monster, who has been everything from a Hasbro Toy to a Saturday morning cartoon. Nothing endears more than destructive forces.

This version is all Japanese, which makes it a lot of fun. For one, Godzilla’s actually IN this movie, and not just making a cameo as he did in the recent American production. Nope, the Goj is right there big and bad and on screen in the first five minutes or so after the Japanese Coast Guard discovers a boat drifting aimlessly about the Bay (said boat becomes important later on. Sort of. If you’re paying attention. And you might not be by that time) and suddenly there’s steam and blood―yes, blood―pouring into a tunnel…wait a minute, tunnel disaster? Did we not just see something like this? Then Godzilla appears…in the guise of a giant sock puppet weasel. With button eyes. Kinda cute, in an Ultraman kinda way. But then it evolves into the Godzilla we’ve all come to love…actually, the most insane looking Godzilla ever. Really. This guy looks completely deranged, teeth and all. With a tail twice as long and a mind of its own. And lasers and an air defense system. Really.

The Japanese response is to legislate Godzilla to death. Never have you seen the formation of more and more elaborate committees, themselves evolving from “Basic Emergency Committee” to such things as the “Ad-Hoc Cross Party Unexplained Creature Smashing Us Committee for Peace and Well-Being and the Next Elections” committee, which can’t make a decision so they bring together the “Committee of Nerds, Dweebs, Mavericks, Rebels, Outcasts, Druids, Compound Interest, and A Couple of Guys who Are Standing Around” to make a decision but they can’t, either, but at least they can do research. Guys running around the instantly well-equipped and prepared conference room (I mean, wow, the moment a new committee is formed, phalanxes of toadies are putting tables and chairs and servers together in pleasing and tasteful manners) throw laptops at each other the moment they discover something interesting, like radioactivity is rising everywhere the insane sock puppet goes. You will be amused.

But, mostly, you will be baffled.

The onslaught of subtitles will blind you. There are two sets, a top one superimposed on the kanji explaining which committee this is and who comprises it (very important because you can’t know the players without a scorecard) and what their relationship to the government is, and the bottom set of subtitles telling you what everyone is saying. Essentially, it’s a movie sandwich, and I advise you to stick with the bottom ones only because the committees change so fast you don’t really care anymore. There is US intervention, honchoed by a Japanese woman who’s a US government representative…suuure she is…who essentially wants to nuke Japan. Again. The committees take a dim view of this and they invoke a National Emergency (finally! Someone makes a decision! We don’t know who!) and unleashes the Japanese military on the sock puppet.

Because vintage Godzilla swings into action as the sock puppet shakes off missiles and tank rounds and smashes Tokyo like the Hulk under the influence of the Scarlet Witch (see what I did there?) A couple of US bombers show up and put a hurtin’ on the Goj (to the enthusiasm of at least one cabinet member. Nice to know we’re still appreciated) but all that does is make it mad. You wouldn’t like him when he’s mad (see what I did there, again?). And the smashathon, radioactive-breathathon of Tokyo goes into overdrive. Oh no. Let’s freeze him.

But, don’t be put off. This is, indeed, a very fun movie…as long as you stay awake between committee changes.