Down and Out Under the Earth 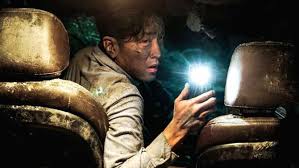 A car dealer, Jung-so, just closed a deal for a fleet of cars and it’s his daughter’s birthday and he’s driving home with her cake and happily enters Hado Tunnel Number One (which apparently runs for about 475 miles through the most untraveled stretch of highway on the Korean peninsula) when it collapses. Always something, isn’t it? And not just “collapse,”…a friggin’ apocalyptic cave-in of not only the tunnel but half the mountain, leaving only a few feet of the far exit still open. Jung-so’s Kia sedan withstands a pummeling of rock and earth that would have flattened an Abrams tank (good cars, them Kias), living him dirty, bruised, intact, and trapped.

He whips out his cell phone, which doesn’t explode, and calls the most incompetent 911 dispatcher in the Korean peninsula, triggering the most epically inept rescue operation in human history. Apparently, about the only things that work well in Korea are Kias and cell phone towers (and the battery in Jung-so’s phone, which lasts forever, and even his car battery which lasts even longer. Without exploding) because it turns out the tunnel was built by the most incompetent construction company in all of Asia, one that put in too few support rods and doesn’t know how many fans it installed, nor where they installed them, and didn’t bother to draw up the blue prints to any kind of scale or accuracy. And, which is in charge of building Hado Tunnel Number Two, a few feet away from where Jung-so is trapped. After about an hour, said company starts lobbying to resume blasting on its new tunnel because, hey, Jung-so is trapped in our first shoddily built tunnel so he’s a goner so let’s stop wasting time here and get on with it. All of which drives the rescue commander, Dae-kyong (played by Dal-su Oh of Oldboy fame)―the only competent man in the entire Korean government―nuts to the point he drinks a bottle of urine in solidarity with Jung-so.

All of which emphasizes the point that, if you’re trapped in a tunnel in Korea (or a haunted island, or a sealed apartment) you’d best start thinking about getting yourself out of this pickle because the government honchos in this movie don’t put a whole lot of value on your individual soul. I don’t know if that’s Seong-hun Kim’s particularly political viewpoint or the result of having a lot of crazy people to your north with nukes, but it doesn’t take long before the ministries and bureaus and the population decide to write Jung-so off and get on with it. Now why they would allow the obviously inept construction company to get on with it, I can’t say, but it may be due to the particularly gruesome death of a rescue worker (apparently saw blades in Korea are made by Samsung) which is blamed on Jung-so’s wife, who apparently has the last say on whether Jung-so should be rescued or not (someone should check to see if she recently upped his life insurance). Scratch of the ole noggin’ here because rescue workers who die on duty in the US are considered heroes, not victims. ‘Course, we don’t have crazy people to our north with nukes. Just bacon.

It doesn’t end all happy and resolved, but it does get resolved, primarily through the individual effort of the one or two motivated and competent people in this whole cockup. Which is a lesson. No one’s going to save you but yourself.