Now that the torture laughingly called cardiac “rehab” is about over, I’m easing back into my former life of conventions and conferences, starting with Capclave. I love Capclave. It’s small, informal, and all about books. No cosplay, no movies, just a bunch of famous and semi-famous scifi and fantasy writers mingling with the Great Unwashed. And I almost missed it. Only by a casual glance at my calendar last Wednesday did I realize it was two days away. Too late for me to grab a hotel room, so I drove up on Saturday morning and spent the day. 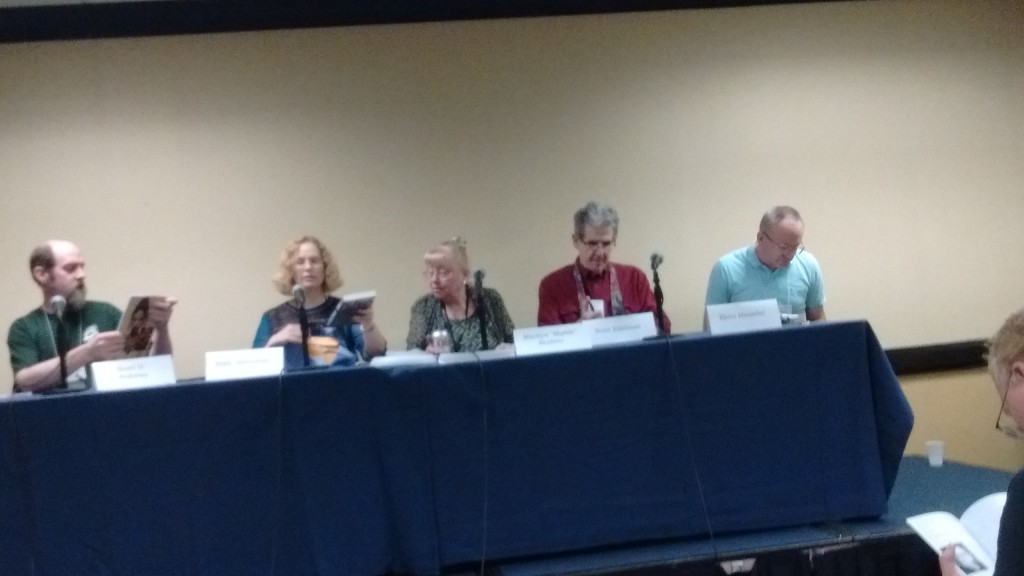 (guy in the red shirt) reading of his story, 101 Things to Do Before You’re Downloaded, coming out in a Dark Regions Press anthology pretty soon. For the two or three of you who don’t know, Scott Edelman is Marvel royalty, which makes him my Leige Lord and Ruler. And, he ain’t no slouch in the short story department, needer. Blown away, I was.

The next reader was Doc Coleman, 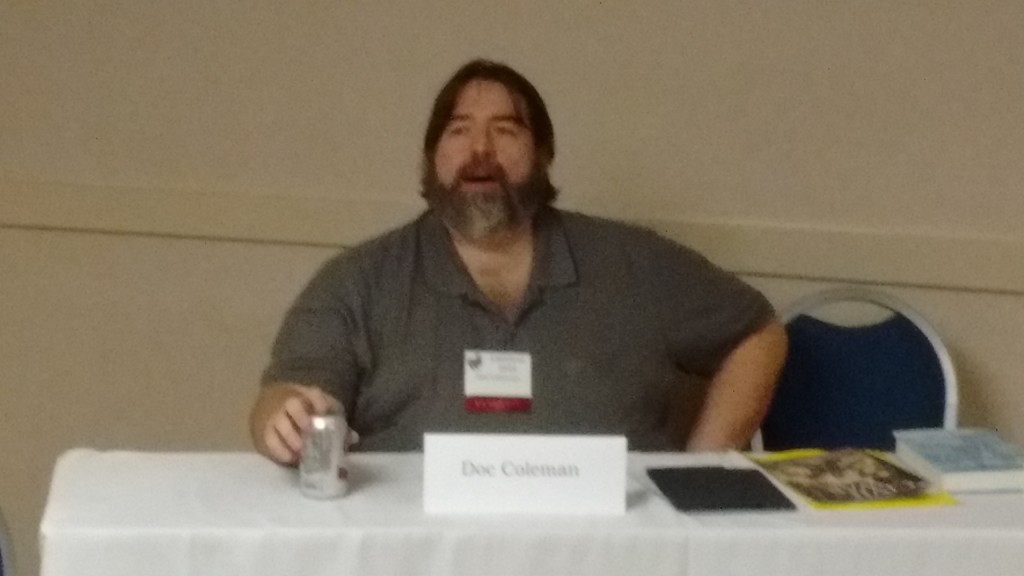 a guy I didn’t really know, and I stayed more out of politeness because seems a rude thing to walk out as an author is walking in. Boy, am I glad I did because his story, The Shining Cog, in The Way of the Gun anthology, blew me even more away. Coleman is a master story teller, perfectly paced, does all the voices. Good stuff. 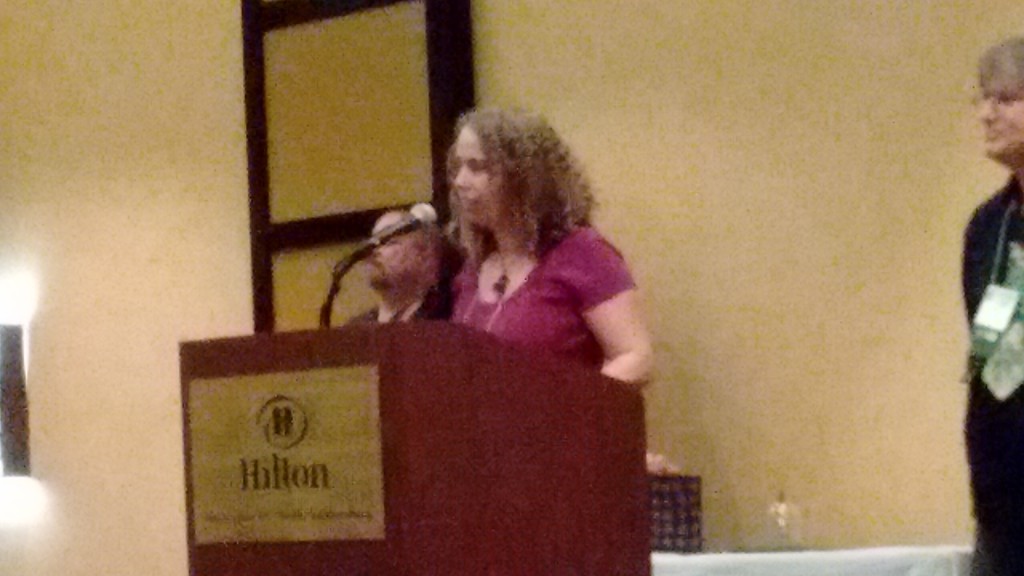 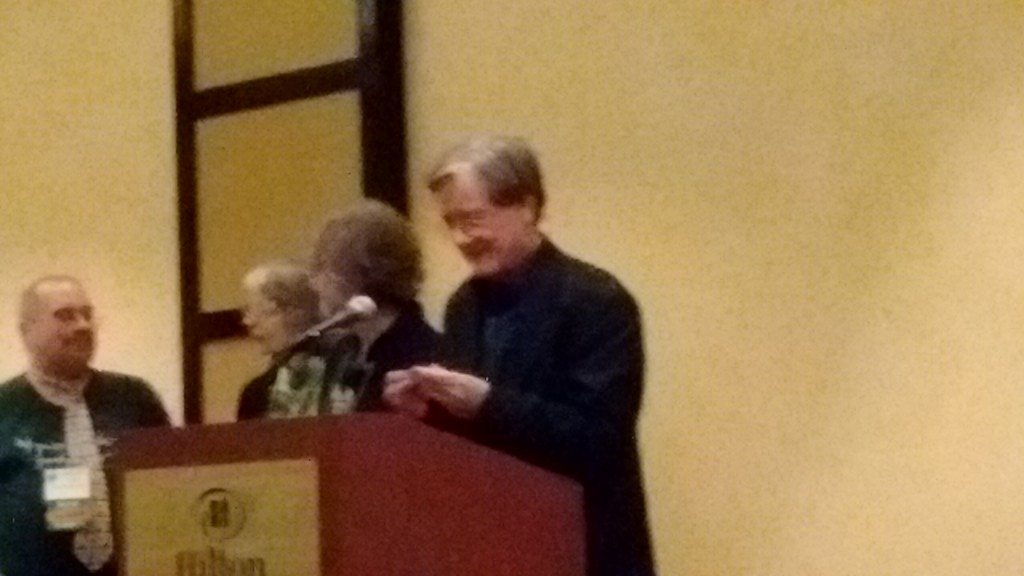 were the Guests of Honor but, through some inexplicable set of circumstances, I didn’t see them until the Saturday night ceremonies. I think the Secret Service was involved… 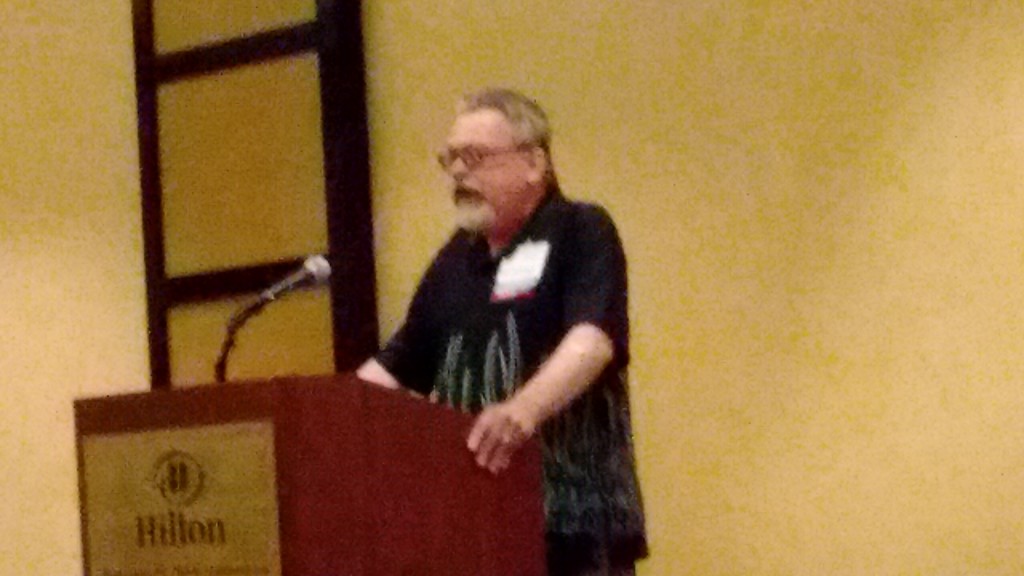 1. Putting Real Science in Science Fiction panel, with Bud Sparhawk, Michael Capobianco, Alan Smale, and Ian Randal Strock. Interesting observations made by all, including that, as science reveals even more details of the physical universe, there is less and less set in stone, meaning imagination is set free. For example, the New Horizons mission to Pluto revealed a planet unlike anything expected (which, seems to me, is fertile ground for a whole slew of new scifi stories). Back in the Gernsback days, science was in the forefront of the scifi story, almost as a means of teaching. Now, because we’re all older and smarter, there are two scifi short story models: the Analog style, where the science is prominent; and the Asimov style, where the story rules. Bud Sparhawk noted that most of new scifi is about engineering, not science, and engineering, itself, is becoming denser. Michael Capobianco said if you’re old enough, you can remember when things were comprehensible, which I thought spot-on. Who works on their own cars anymore?

2. I drifted over to the Dealer’s Room and immediately ran into Mike McPhail 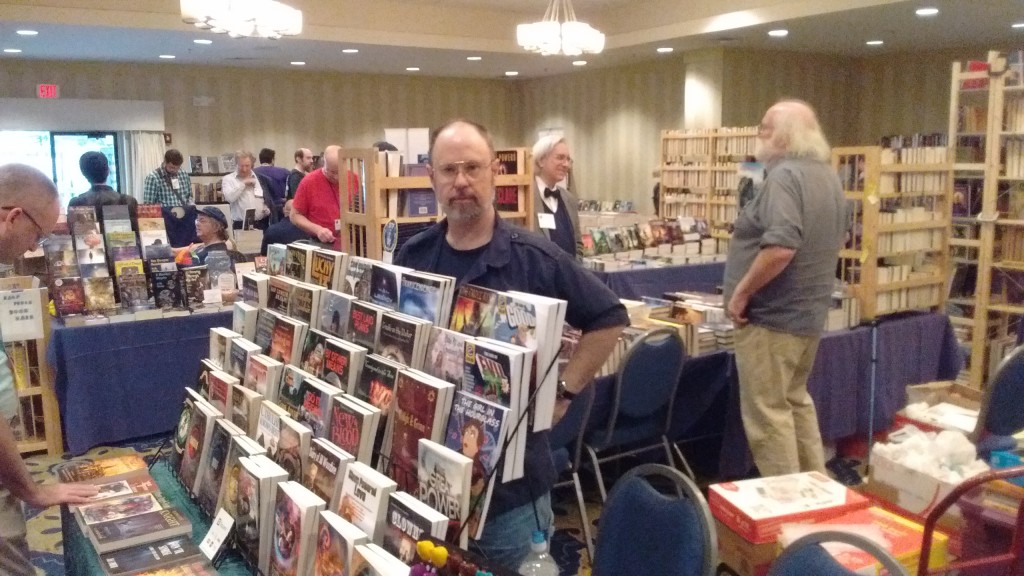 and his lovely wife Danielle Ackley-McPhail, two of the best small press people around. Mike is into military scifi and has several titles and anthologies out now and planned for the future. I managed to snag the last copy of his 2007 anthology, Breach the Hull, and then spent the evening hunting down several of its contributors and forcing them to sign. Mike has a Kickstarter (http://tiny.cc/Novels2016) that may be finished by the time I get this posted, but go take a look. Danielle and he were gracious enough to let me sit with them at their table during the autograph session 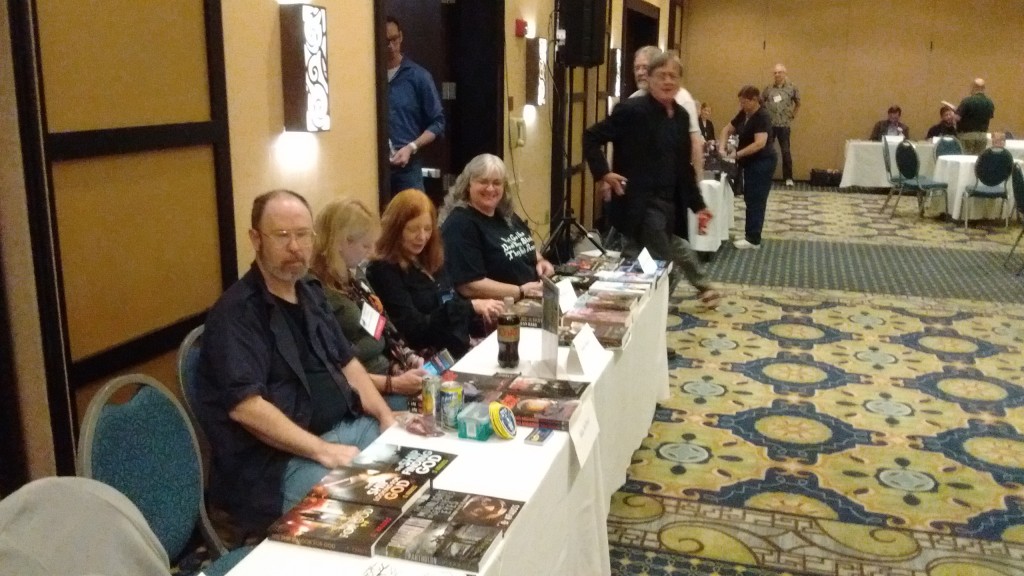 and hawk some of my own titles, of which I got barely even passing interest. Eh. One day. Danielle is at the end of the table. The two women in the middle are Jean/Jeanne of the David Bowie song.

3. Panel: Social Media Promotion Without Being Obnoxious. Kate Baker, Inge Heyer, Natalie Luhrs, Michael A. Ventrella. Being obnoxious off the Richter scale, I figured I could use some pointers and did, indeed, pick up some pretty good tips from the panel members, like don’t waste your money advertising on Facebook and don’t be a jackass on Twitter. Too late for both but, hey, validation is its own reward. I was surprised to hear some newbie authors scattered about the audience contend with the notion that reviews are for readers, not authors. Absolutely true. Authors shouldn’t read their reviews…okay, I do, all two of them, because I’m thick skinned and I’m interested in what I’m doing wrong and I appreciate criticism. No, really, I do. And no, I’m not upset. Those are tears of joy. 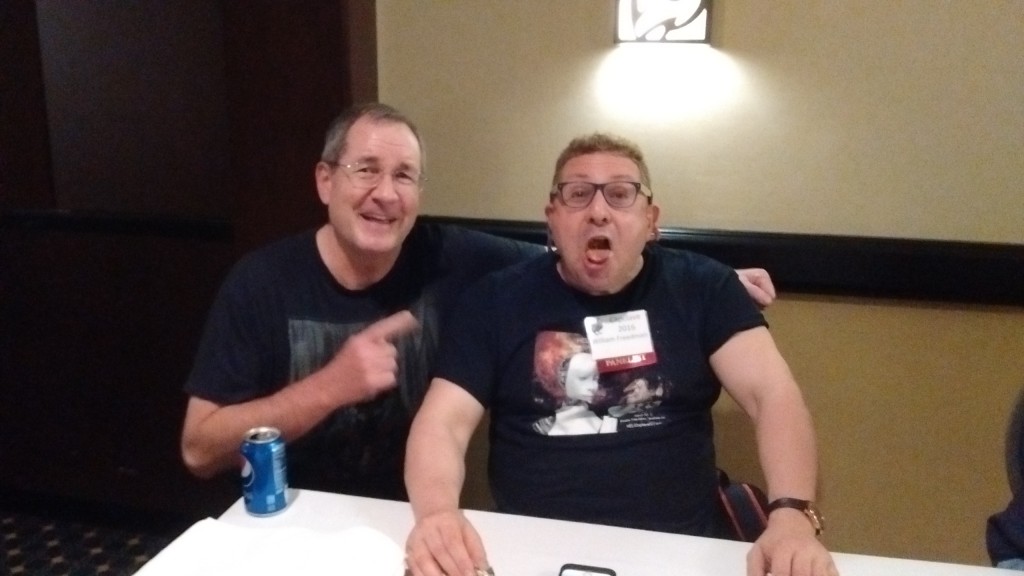 is a Rebel E compadre, both of us sharing scars and wounds inflicted by our editor, Genghis Jayne, and we tend to commiserate on Facebook. So, there I was, sitting in the lobby doing a few Capclave tweets when I noticed Bill, too, was doing Capclave tweets. Wouldn’t you know, dude was sitting right in front of me. First time we had ever met so went out and grabbed some lunch at the most incomprehensible Japanese bento booth in America and then hung out with the McPhail phalanx. If I don’t get some rye whisky, I surely will die. 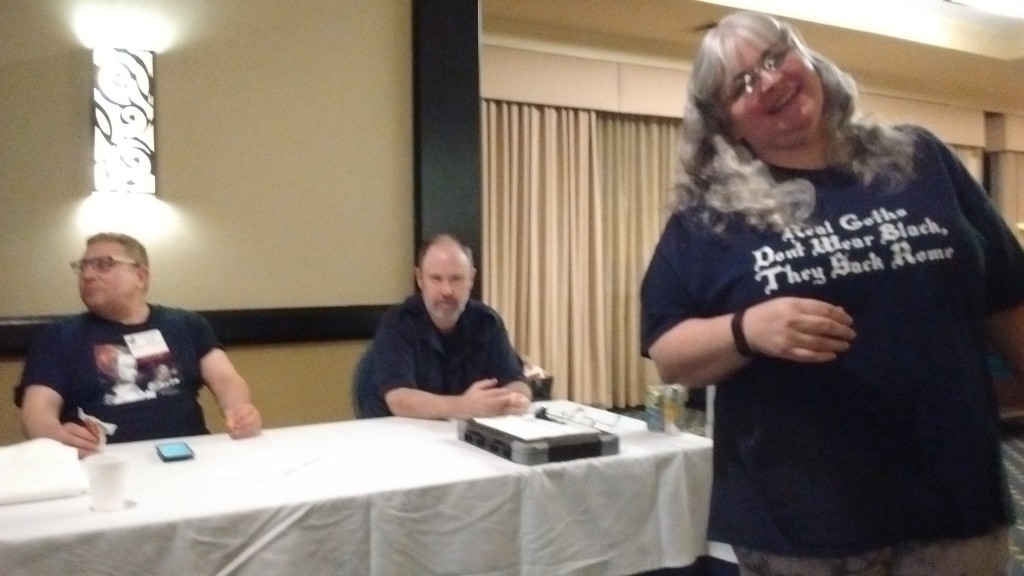 5. Panel: Military SF: More than People With Guns. Tom Doyle, Walter H. Hunt, Bud Sparhawk, Hugh Taylor. I was rather surprised that Mike McPhail was not on this panel because he IS Mr. Military SF, but, hey. There was much discussion between the audience and the panel about the execution of battle plans versus seat-of-the-pants strategizing in a FTL (faster than light. See? I know the lingo) space war because, you know, FTL, space, and things are moving a bit fast. “You, Squad A, go over there and do this! You, Squad B…” just ain’t gonna cut it. It’s more, “Fleet, Execute Plan 152!” The old military maxim that ‘no plan survives first contact’ leapt immediately to mind so, dudes, you’re gonna need a seat-of-the-pants guy nearby when things go TU (I’ll leave that one to your research). Yes, this is true, the panel acknowledged, but innovators would not do very well in a future command structure that favors Plans so there is little likelihood such a person would be in a high enough command position to pull chestnuts out of fire when things went TU (got that one, yet?). Which, to me, leaves open the possibility of novels and stories where some lowly lieutenant pulls said chestnuts out. When things go TU. 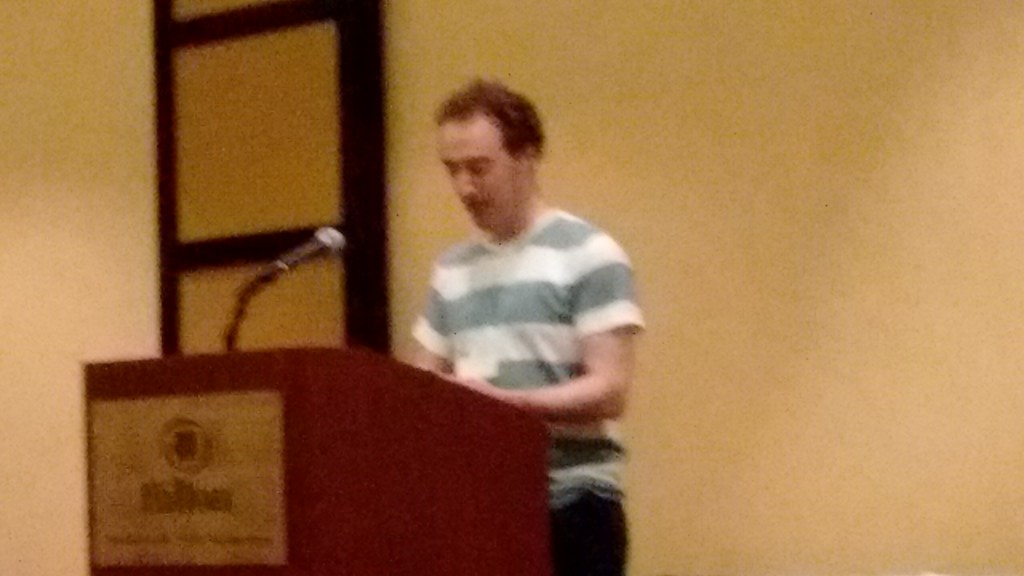 is an American treasure, editor of Clarkesworld, which has the good sense to reject my submissions (one day, one day) and he finally, FINALLY, after ten years of being nominated, won the WSFA Small Press Award. So, he read Susan Lucci’s acceptance speech. At some point, he meandered past our table and he and I sympathized with each other about the torture of cardiac rehab.

So, a good time had. Acquaintances renewed. Autographs hawked. Far too many books bought (holy moly when am I gonna get the time to read all this?). Definitely going back next year.