Col’m, that is. It comes in at 98,500 or so words. Mind you, that’s the first draft; I’m sure the word count will alter as I go through subsequent drafts. The story, though, should survive because it ended up where I wanted it, even though it took some rather surprising roads to get there. Who says writing is a controlled and carefully planned activity?

This ends the Partholon trilogy, at least this portion of it. There may be another trilogy to follow. Dunno. We’ll see.

I’ve noticed lately that a lot of readers are irritated by trilogies. They don’t want to wait for the subsequent books; they want the entire trilogy available at once. You might think I’m referring to Game of Thrones but I’m not. That’s a series, not a trilogy, and any frustration a reader feels about Martin taking his time is misplaced. You  want it quick, or do you want it good?

I write trilogies instead of series, because I want the story– at least, this portion of the story–to reach a conclusion. Readers do, too, but it is a sign of these modern times that readers get angry if there’s a delay between Book 1 and 2, much less 3.

I’m a bit baffled by that.

See, back BK (Before Kindle), I had to wait for the 2nd and concluding books of a trilogy I was reading. Best example is Philip Jose Farmer’s Riverworld series. I read the first one, To Your Scattered Bodies Go, 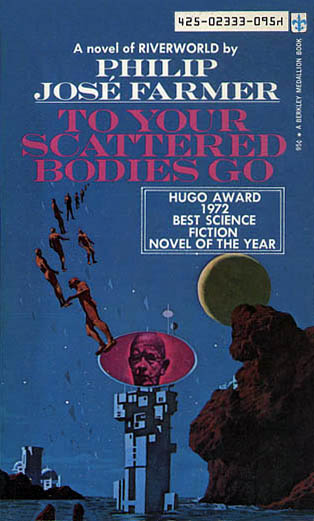 and was blown away. I got the second one, The Fabulous Riverboat, a few months later…and then waited five YEARS for The Dark Design. Was I PO’d? No. I had a delicious sense of anticipation each time I went into a book store and bee-lined for the scifi section to see if the third one was out yet. And the day of joy when it was and I bought it…and the disappointment when I read it and it didn’t turn out the way I had hoped (and, yes, I know, Riverworld turned into a series because Farmer wrote a few more books about it, but it will always be a trilogy to me). And I will always keep that delicious sense of anticipation waiting for subsequent books of other trilogies to appear, like I did recently with Kate Elliot’s Crossroads series.

But, I get it, so, from now on, I will not release a book if it’s part of a trilogy until all three books are ready to go.