R is for Rocket

Agog. That’s my reaction to the launch of the Heavy Falcon rocket by Space X. Did you see those two boosters RETURNING TO THE LAUNCH PAD???? In case you didn’t…

I don’t know if other segments of the population reacted with the same level of agog-ness, but I’m pretty sure a lot of us old NASA geeks did. The few of us left, I mean. A warming cockle of a distant heart, it was, a re-beating of a moribund spirit, a harkening back to naïve youth and the naïve belief in unlimited horizons and The Futuuuure! that we NASA geeks lived and breathed during the Space Race days.

It’s amusing to think of it now but, back then, we were all convinced we were getting jetpacks and would live on the moon. Indeed, one of my favorite picture books was:

which I devoured over and over and over when I was five or six years old, the odd drawings of young spacemen grinning at the little boy in a rather predatory manner notwithstanding. 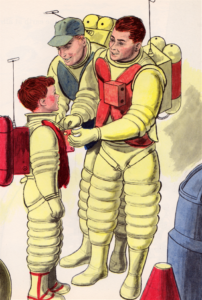 We were going to live on the moon! And have jetpacks! Neat!

We said “neat” back then. “Cool” came later.

I was a little too young to remember Sputnik and the ensuing panic, but I clearly remember John Glenn’s Friendship 7 take-off from Cape Canaveral (as it was known then before it became Cape Kennedy then back to Canaveral so most of you probably are not aware of the name change) because every classroom in BC Swinney Elementary School in Lawton, OK had a television wheeled in and tuned to so we could watch. Which just wasn’t done, wheeling televisions into classrooms, that is, signaling to all of us pointy-headed kids that this was a Big Deal. It certainly was to me. I was thrilled, astounded, amazed…agog. And, yes, I know, Alan Shephard had actually launched into space a year before and I probably saw that, too, but there is something about the Glenn launch that remains better seared into memory. I guess because that launch was the first US orbit of the Earth and all we pointy-headed kids knew that the Russkies had gotten there first and we were going to fall under Soviet domination if we couldn’t match, nay surpass, their effort. So it was with great geopolitical relief that we kids watched the launch and splashdown and all breathed a collective sigh of relief that Western Values and the American Way were once again dominating…

Of COURSE we didn’t think that. We thought we were going to live on the moon. And get jetpacks.

At least my best friends and I did. This conviction was enthusiastically shared among the very small (about three, if that) group of dweebs and nerds I hung out with; we bought models of Mercury and Apollo spaceships and mounted them on displays for science fairs and had crappy little telescopes and joined the NASA Kids’ Club and got autographed pictures through the mail of astronauts in training like Mike Collins and Neil Armstrong (man, I wish I still had those) and knew when every launch was scheduled and begged and pleaded Dad to take us to Cape (then) Kennedy so we could see a launch and no, I’m not going to waste a bunch of money so you stupid kids can watch something you can watch on TV, even though we were living in LA (lower Alabama) at the time and the Cape and Cocoa Beach (where Tony and Jeannie lived) was about a four hour drive. Would have interrupted the servicing of his many girlfriends, I guess.

The astronauts were our heroes, the space program was our inspiration. War would end. Nations would unite. We would explore the galaxy. We would live on the moon.

What the hell happened?

A few things. The first was the slow disintegration and suddenly spectacular destruction of my family during the period of the Apollo program, which serves as inspiration for my (WARNING: shameless self-promotion ahead!) upcoming Frank Vaughn trilogy (Frank Vaughn Killed by his Mom, Southern Gothic, Looking for Don). I went from breathless excitement during Apollo 8’s magnificent 1968 Christmas Eve broadcast from the moon

to frantically squinting through my laughable 60 power telescope the night of July 20, 1969 to catch a glimpse of Aldrin and Armstrong cavorting on the moon to…not even watching the news broadcast of Apollo 17’s last moonwalk in Dec 1972. Didn’t care anymore. That whole “family destruction” thing.

And I wasn’t the only one. No one cared. There had been a national-level destruction to go right along with my personal one and we turned away from space programs and The Future to social programs and the Right Now and did not ask what you could do for your country but asked what are you doing for ME, man? We saw no farther than the bridge of our noses. We looked down at our shoes, not at the sky. We wanted to Get Ours, not Go Out There. And all that space stuff was silly and expensive and we’ve got more important things to worry about here like oil shocks and inflation and worldwide liberation movements and finding jobs and just getting by.

No living on the moon. No jetpacks.

And, now, look at this. Someone has revived it. The spirit stirs. And maybe you kids will get to live on the moon someday. Me, I’m too old.