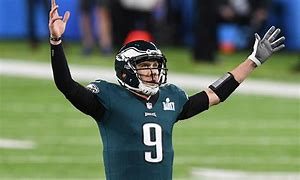 I was sitting around doing nothing this past Friday when my son called and said, “Hey, would you like to meet Nick Foles?” Seems the Nickster has written a book and was signing copies at a bookstore in Harrisburg. Harrisburg? That would mean driving in Pennsylvania, something no true son of New Jersey takes lightly. What is the most terrifying sight on the highway? A Volvo with PA plates. Every accident in New Jersey is caused by someone from Pennsylvania so it is with trepidation that one crosses the border. But, what the hey, if we survived, might be a pleasant afternoon’s diversion, so I went.

I figured this would be like one of my book signings: a few people, mostly relatives, would show up to drink coffee and eat canapes I bought and then hit me up for a loan while studiously ignoring the purpose, which was, buy one of my books…although SOMEBODY must be buying my books because I just doubled my Amazon income. Yep. This time last year, I made $4.08. Today, I got $8.16. Thanks, relatives!

There were, though, a few more people than I anticipated: 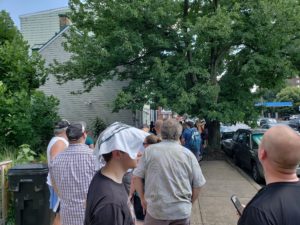 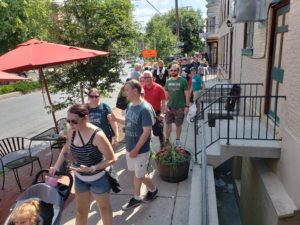 The line stretched for six blocks. It took us longer to find the back of the line then to drive to Harrisburg. Yes, that’s an exaggeration, but not by much. I was dressed for an inside-the-store tete-a-tete — button down shirt, dress pants, black leather shoes, you know, old guy clothes — not standing on a cement sidewalk for three hours in 92 degree weather, no shade, no water. I went back to my son’s brand spanking new Mazda something-or-other to sit in the air conditioning. Couldn’t start it. Friggin’ thing doesn’t have an ignition key slot even though it’s got a friggin’ ignition key. What the eff? So I called him and called him and called him and he finally deigned to answer after I had lost six pounds in the sauna bath of the front seat and there’s some button and you push on the brakes and, ya know, screw you kids. Get off my lawn.

Anyways, made it back and it was, despite Vietnam jungle conditions in high summer, quite pleasant. We were mixed in with a rather affable group of Eagles fans…yes, they do exist…and had lively conversations of Wentz vs Foles (Foles, hands down), Buddy Ball versus Pederson ball, and who do we hate more, Roger Goodell or Chip Kelly. I remain in firm conviction that Randall Cunningham, Captain Scramble, was the best Eagles quarterback of all time and no one beats Reggie White and DeSean Jackson and yes, yes, I’m stuck in the 80s and 90s, when football was football and not the slightly rougher version of soccer that Goodell and the rest of the jelly spines seem bent on turning it into and, ya know, screw you kids. Get off my lawn. 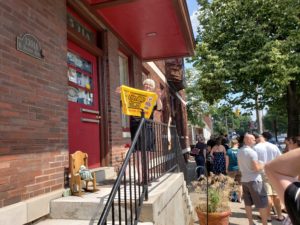 at us and we laughed because it’s the Steelers, the Eagles’ annoying little brother, and we tolerate them. But then some drunk Dallas Cowboys fan came out of a local bar and, well. Best no more be said. There were Eagles chants and a guy with a guitar singing Eagles songs. Yeah, there are some.

We shuffled along and eventually we were inside and air conditioning, thank you Lord, and the line was shuffling up to some long table where about four or five guys were standing while pulling books out of boxes 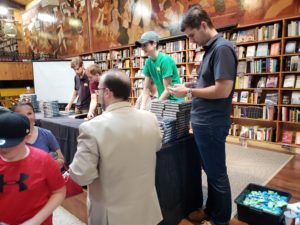 and handing them off to the shufflers who then shuffled off to the left. My son got his book and I followed along craning my neck for the next watering station and couldn’t really see anything so I asked, “Where’s Foles?”

My son pointed behind me. “Already met him and got my book signed.” 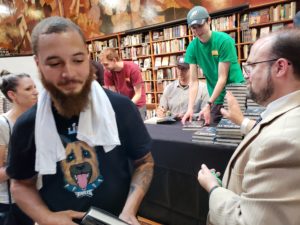 Wow. I completely missed it. Can that man run an offense, or what? It was so fast I didn’t get a book.

So I walked back there and gave him one of mine.

This entry was posted in Life in the Shenandoah Valley, Writing itself. Bookmark the permalink.