Joffrey Charlemagne for US Senate

Okay, for those who haven’t watched Jason Smith’s web series, Losing Cable and Losing Cable 2, I gotta ask, why not? Go do that right now.

For those of you who have, and are wondering what mad genius lies behind this brilliant, moving, insightful, action packed, thrill a minute carnival ride that will probably bring about world peace, I give you… an interview with Jason Smith (follow on Twitter at @TheJNorth ): 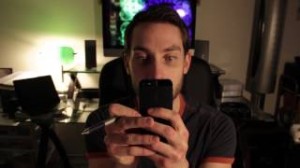 1. Who are you, and why haven’t you been indicted?

My name at the moment depends greatly upon which country I’m in, but here in America, they call me Jason. I’m a filmmaker who, for some reason, has been able to do what he wants to do without having imploded from debt yet. Give me a couple more months though. I’m the owner of startup production company that makes webseries. Think TV shows, but on the web, built for the web.

There’s definitely inspiration from some life experiences in the series. Granted I haven’t hot boxed in a car with someone’s daughter who has to wear a gas mask in the back seat to shield her virgin lungs from sin smoke, but if I were to find myself in that situation, I think it would go down a lot like it does in the first episode. Anyone who does video work as a freelancer, a near broke freelancer especially, can attest to the fact that they often run into a lot of crazy situations while working with all sorts of people, because when you’re broke, you’ll take almost any job that crops up. After a couple years of this you start to think, “You know, I should quit this and just start making movies out of these stories.” Not every minute of my films are life experiences,  of course, but a lot of dialogue between the characters is based off of conversations I’ll have with friends and people I’ve worked with.

3. What’s the story behind Space Commander?

Space Commander: Action Infinity started as a tiny blip in the first Losing Cable movie. I needed a fake show Charles and Jordan could be watching, and I needed the audience to really care about why these guys were so enraptured in this quest to turn their cable back on, thus Space Commander was born. There was such a strong reaction to that minute long piece in the first film, that I really wanted to make Space Commander come alive in the sequel. I wanted Commander Raul, the show’s hero, to have a story unto himself that the audience could follow and keep up with as the series progresses, which is why we have the “Galactic Baby Militia” story arc in Losing Cable 2. It gives me a chance to have some fun writing a comedy space opera without the stresses of doing it for real. However, if people like it enough this time around I don’t see why Commander Raul couldn’t have a series of his own one day.

White vans seem to be driving down my street more often recently, so either the FCC’s after me, or my neighborhood is going painter crazy. If the FCC ever cracked down on YouTube, it would basically be the end of YouTube, and the internet, and the world as we know it. You know, if our civilization ran off the energy of expletives we’d have colonized tons of galaxies already, with Samuel L. Jackson as our immortal leader.

First we have Paul Kessler, who plays Jordan in the series. Paul brought so much more to the character than I had ever envisioned and when I wrote the sequel I basically wrote him. We’ve been working together for years on movies, so we’re able to bounce ideas off of each other on set, rewriting the script as we rehearse and work through the scenes. It’s amazing how flexible both Paul and Trevor are together on set. If any line ever feels awkward for them I just tell them to make something up, and it’s amazing what they come up with.

Now speaking of Trevor, the second main actor in the series is Trevor Ford. Trevor has been in my movies since I started making them ten or so years ago, so after almost a decade of doing this we’ve become really comfortable with working together in stressful, ball clinching situations. He’s a terrific guy to work with and was in the Yale Ex!t Players improv team for years, so he knows how to come up with good lines on the fly, which helps tremendously when my mind hits a road block. He comes out swinging every time.

Finally we have Commander Raul himself, Chris Bradford, who I only just started working with during the first Losing Cable, but we work together like it’s been years. It’s funny because he comes on set looking like this Viking god, I mean this guy’s beastly, but he’s so calm and collected on set, and in person, that you’re totally thrown off for a second. You’re like, “Wait, so you don’t shoot lightning bolts from your fingers and you won’t pillage my house to the ground?” You kind of wait for it, but alas he’s one of the chillest guys I know, however when it’s time for him to jump into that aggressive character he owns it.

6. How did all of this come about?

Well, I was at a parking lot party chugging BBQ dogs and Lime-a-ritas like it was my job, when Paul comes up to me with an idea for a sequel to Losing Cable involving Charles and Jordan on a quest to a Space Commander convention. Now, I’ve never had the intention of making a sequel to anything I’ve done. I literally say I’m going to quit movies every time I make a movie, but as soon as he told me his idea I threw my hotdog to the ground, screaming to him how great of an idea it was. A few months (and a few Lime-a-ritas) later, we started production on Losing Cable 2: Journey to Infinity.

Apocalypticism is actually entirely CGI. James Cameron and I are bros. (That’s a lie. We’re not bros. Don’t sue me James.) Apocalypticism has gone through some transformations from when we first started developing the concept, but the series as a whole has been able to keep it’s original promise of relaying practical survival concepts to the common people. The only scripted bits are when Mike and Tom, the hosts of the show and also the creators, talk to the audience. We just let the experts we feature do their thing and make sure the camera catches every moment.

Northward Advance has been an idea of mine and my group of friends for years now. We wanted to create a production company independent of networks and studios. Years later that mindset is still there, definitely, but since then internet movies and series have started to explode in popularity. I think there’s a big future in this new frontier and creating films on a fraction of the budget, with only us as the captains, and with the ability to have a global audience watch our series any time, anywhere is way too amazing an opportunity to pass up. Right now I think a lot of filmmakers see internet movies and series as a stepping stone to working with Warner Bros. or AMC one day, which it can be and that’s great for them, but I see these small web production companies one day (sooner rather than later) becoming as big as AMC or Warner Bros., but with way more flexibility than those big networks ever had. The internet, in this day and age at least, changes the nature of production companies and entertainers. You gotta keep it real, and that’s why I love the internet. It forces artists to not bullshit and just produce good shit. Maybe that should be our slogan, “No Bullshit, Just Good Shit”.

9. How do I contribute to Joffrey Charlemagne’s Senate campaign?

Well, you can log on to kickstarter.com and search for Losing Cable 2: Journey to Infinity where you’ll be able to help make Joffrey Charlemagne’s Senate debate, along with the second half of the series, a reality. We’re in the process of acquiring funding to finish the last three episodes of the series and need everyone’s help. We have some awesome rewards for the awesome people who donate, like Space Commander Badges and signed limited-edition DVD copies chocked full of special features, bloopers, and commentary. So check out our Kickstarter campaign and if want to see more Joffrey and Raul then head over to kickstarter.com, search for Losing Cable 2: Journey to Infinity, and donate to help finish the journey! [EDITORIAL ASIDE: This is all pending Kickstarter approval, which should be sometime next week…]

10. What else do you plan to unleash?

Next up I’m starting work on a pretty ambitious sci-fi webseries I’ve had in my head for a few years now. If the fates allow it, I’ll be developing it through the summer and writing about the development behind it in my blog and in the BTS Mondays videos on our website as I move along. I’m really excited to get started on it, and you’ll definitely hear more as we roll into summer. Otherwise, Apocalypticism Season 2 will be launching this Spring and from meetings we’ve been having lately it’s going to be amazing. We’re starting production this month so you’ll hear much more about that fairly soon.

Did I mention that Jason is my cousin?

3 Responses to Joffrey Charlemagne for US Senate