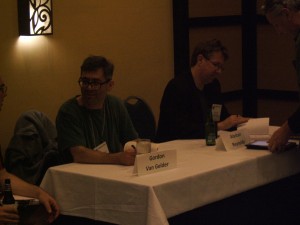 I have been an Alastair Reynolds fan ever since I picked up Revelation Space and got my mind blown. Man, you gotta read the series. Just gotta. So when I heard that he was the Guest of Honor at CapClave 2015, I had to go. Had to.

CapClave is not your run-of-the-mill scifi convention. There’s no cosplay, no girl-on-girl vampire action (at least not that I could discern), no TV or movie stars. It’s fans of scifi coming together under the behest of the Washington Science Fiction Association to celebrate the literary. It is refined, elevated, and intelligent. Why they let me in, I have no idea.

One slight drawback to it: the guests and panelists and a lot of the attendees were writers. Now, you may not have noticed this, but writers are a rather egotistical bunch. Any human being who believes their particular method of placing words on paper is excellent enough to attract readers and their hard-earned money is already in trouble. Add the particular geekery that goes with science nuts and, Holy Hannah, the validation needs were off the Richter scale. There were a few occasions I was downright cringing over the one-upsmanship and discourtesy some panelists and audience members displayed. But, hazards of the job.

And I got to hang out with Alastair Reynolds.

Well, I mean, it’s not like we were hoisting brewskis and exchanging phone numbers or anything, but I got to hear him quite a bit, including a presentation he gave about Mars in science fiction. The guy was an astronomer, so knows his stuff. He was on panels I attended like Democracy in Space (conclusion: there won’t be any), Generation Starships (there won’t be any), and Near Future Science Fiction (there’s plenty, but it gets outdated quickly).But, the best of all, I got to have coffee with the guy.

It was billed as a Kaffeeklatch and there were 10 other people there and you had to get your own coffee which I couldn’t because the line was too slow (a satellite Starbucks with one employee and about six Niles Crane types in front of me) and Mr. Reynolds had tea (it’s a Brit thing, you wouldn’t understand) so it wasn’t exactly coffee nor was it one on one. But, it was still great. Mr. Reynolds is charming and erudite and approachable and the conversation was informal and fun and ranged from his current collaboration with Stephen Baxter to binary stars and X-ray databases. Very cool.

Later, I got him to sign my copy of Chasm City, and even managed to slip him one of my buttons without looking too much like a helplessly geeky and desperate fan boy. Not too much. 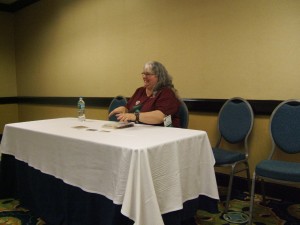 and Scott Edelman, who I’d met at AwesomeCon. I got to admire Catharine Asaro, Gordon van Gelder, Bud Sparhawk, and James Morrow from afar. And, to complete my name-dropping, I noted that an old friend from my Backspace days, Alma Katsu, was attending, but I never ran into her.

Going back next year. With, or without, Alastair Reynolds.

This entry was posted in Pros and Cons, Reading itself, Writing itself. Bookmark the permalink.